Killing time at the airport

I'm writing from Boston's Logan Airport. Flight takes off in 1 hour 43 minutes...and hopefully counting. We have already had one delay. 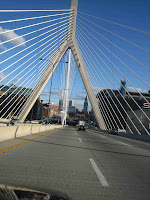 Coach Elmo is always giving me a hard time for incessantly claiming various lessons learned. A few minutes ago my lesson learned was that it would have been easier to be a fencer when checking in for a flight. There is now a VERY strictly enforced bag weight limit of 50 pounds. What I'd like to know is how to get a bike box under 50 pounds while only traveling with a bag limit of two checked bags?

There's a lot of equipment that comes with cycling! Now imagine traveling with TWO bikes. The box weighed in at 97 pounds. My two options: 1. pay $315.10 or 2. relocate 30 pounds from the bike box to a cardboard box that I can purchase for $10.50. That way i'd only have to pay $105 for the extra box and $50 for the overweight bike box. Total= $165.50 - just to ride a bike. It's almost as if they penalize you for trying to be healthy. OK, so maybe i'm being a little bit of a drama queen. It's ok. I got them back. My wheel box was well over the 50 pound limit - they forgot to weigh it! Neener-neener!

Tomorrow i get to pick up all my trick clothes from BioRacer. They make the nicest clothes for the typical cyclist's body - skinny arms, big quads. I know what you're thinking - yeah, i have the skinny arms BUT skinny legs too. Don't let my Olive Oyl (did i spell it correctly this time?) build deceive you. My jeans are normally too tight on the quads and too big in the waist - just like the rest of you cyclists! The most trick of all the BioRacer items are their new tights. They now have the full-side-zip tights that all the pros rip off at the start line. I've wanted these style tights even before i was a bike racer! AND to have them with pink plaid Vanderkittens all over them, well that's just clearly over the top. I normally don't get so excited about cycling clothes (yes, especially after spending the summer covered head to toe in prunes) but the VDK stuff is just flat out cool (ok, maybe i'm a little biased. but as many of you know i never claimed this about my last road kit!) 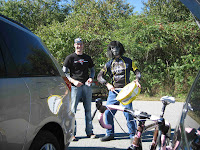 On a side note, I was forwarded a really fun video link made by a fellow racer named cTodd who documented the events of last weekend. After watching it, you'll feel like you were there. He was parked next to me and geWilli. And the last of the video is of my longtime friend Andrew, who took all the photos of me during the races, displaying his origami skills.

(photo to right is of two of the more colorful supporters at the race. )

Gotta get ready to hurry up and wait for the flight now. Next posting will be tomorrow (wednesday.) Hey, Big Bad Wolf, how's the weather?
Posted by PEANUT at 7:00 PM

The weather is pretty good, on the whole with the sun (amazing)and a little win.Mabye rain this wednesday PM. Hope the travel was good, cycling is always on the move ! Again welcome in Belgium. All the best

Meanwhile, from the moment you skipped town (Marin County) it has been raining! Pounding at times. How do you do that?
-- E.C. Chamberlain

Sorry to leave you with foul weather E.C. I think it's just magic and stuff how it works out that way.
Philippe, thanks for checking in with a weather report. I am typing to you from belgium now.

who's that freak in the orange suit in the video?

You mean the enormous guy covered in pussy?

...ah, yes, the glamor & excitement of being an international bike racer...the jet setting lifestyle, the fabulous travel opportunities...
...hope ya get settled quick & back on the wheel...smooth & strong...