Ever wonder how a commercial airplane backs up? 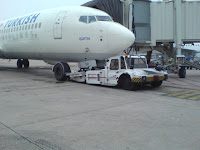 and onto the runway. Apparently the force of the air from the engine against the airport building combined with the exorbitant amount of fuel it would burn to drive the plane in reverse on its own power makes buggy transport a necessity in most cases.

I found this out because I happen to know a buggy driver. When not occupied with 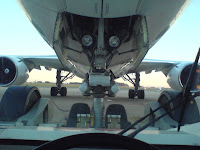 hustling to get my bikes in order, drive me around to the bike races, and act as Euro team manager/mechanic, Jonas can be found behind the steering wheel of an airplane buggy.

A few days ago, as Jonas and I rode by the Brussels airport we 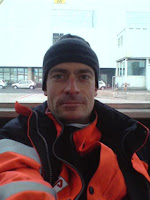 passed a few small groups of folks sitting outside the airport fence with binoculars and cameras in hand to plane-watch. 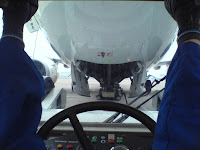 Considering Jonas is practically inside the belly of a plane a couple of days a week for his part-time job, I wondered if he found it odd that people would drive many kilometers just to stand outside in freezing weather so they can catch a mere glimpse of a plane flying overhead. It turns out that many people would kill to have the close-up view of planes that just happens to be part of Jonas' job.

I'm not into planes, but I was curious to know what it is like to see airplanes from a buggy perspective. So I asked him to take a few photos with his cell phone next time he's at work. 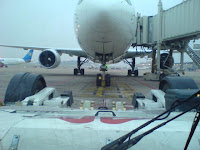 Here are the photos he took: 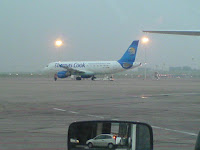 I especially loved the one with his legs resting on the buggy window - a very cyclist thing to do!
Posted by PEANUT at 9:07 PM

Many cities forbid using thrust reversers, Christine. It's very noisy so neighbors don't like it. It uses a lot of fuel and it causes problems with engines ingesting flying debris, delaying flights.

Ed...who works for a major airline too.

...that part time job w/ the bruxelles tourist board is obviously working out for you...you've made the area look so warm & inviting...
...waha...

Thanks BGW! Now only if brussels tourist board would pay me for my services!
Ed: The sound aspect never occurred to me but I can imagine that it would be VERY loud to back up those planes! But i suppose since the airlines/airport are continuously fined for surpassing their noise limit (according to Jonas), the sound of backing up may also cost them money - in addition to the impracticality of blowing power exhaust fumes in the direction of the building, parked cars, jetway (tunnel the customers walk through), etc. And yes - fuel costs would be a deterrent from eliminating the buggie support.
On a side note, i have always privately wanted to work for an airline - it seems so exotic! Yeah, i know, weird.

For most of us it's just another job, Christine. If I recall right, there are roughly 100 jobs associated with each aircraft in a fleet. I don't even want to think about the maintenance-to-flight-hours ratio. I work in an electronics shop as a technician, and never get on an airplane. The hangar mechanics are like car mechanics with bigger toys. We have planners and analysts - all of them cubical rats - and those jobs would make me crazy.

But there's one job I think would be fascinating, and that would be the meet-and-greet person for VIPs and celebrities. It would make for some great stories.

BTW, the Tulsa Tough women's event has been upgraded next year to NRC status. No word about the purse yet, but if Vanderkitten sends you, I'll be sure to be there!

Hey ed w:
Now that you put it that way, the only job i'd want is the one you spoke of - meeting/greeting celebrities. My travel agent at United Olympic desk (Barb) used to do the arrangements for all the big spenders. That could be fun too - but then i'd have to start another blog just to house the stories.