Who says I don't have a social life?

OK, i guess i'm the first to admit i don't really get out much. Last weekend I visited Jan and we 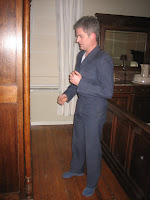 (or rather he) played dress-up while i shot him with my camera like a real photo shoot! 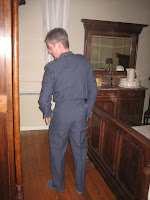 promised to me when i showed up one day last year with my pants hanging off my ass (i was having a super skinny period.) We found the belt - along with the rest of his military suit from 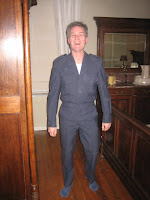 1983. We were both intrigued as to whether he could still fit the suit after 25 years. I don't know why it's always a point of pride to many of us that we still fit into our outfits from the 70's and 80's. In general, we ought to burn the clothes from those generations AND bury them to prevent anyone from leaving the house 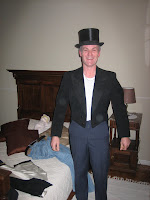 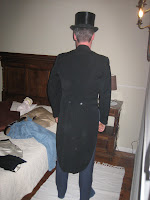 are ok for public viewing though.

He shimmied his body into the suit rather successfully - buttons and latches clasped. Then he pressed his luck with trying on another outfit - a Paris-made tuxedo from the 1800's when people were miniature. Not only did he slide right in but with quite a lot of breathing room - literally! The frame of the jacket and vest was svelte but the belly area was generously cut. Since it's a tux, i suppose he had extra room built into the tummy 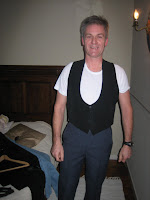 area so it can expand during those long festivities where they serve 39 courses of food! I guess our generation also dresses for the food parties - except our version of the expandable suit is called 'big jeans' since we really don't dress up as much as they used to. 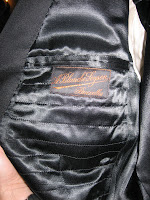 second outing was last night. I met Johan for our usual Tuesday evening of coffee and dinner. Except this time we ended it with a celebratory drink! A few months ago, when Johan and I passed a restaurant that specializes in umbrella drinks, I turned to him and 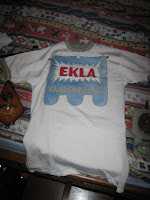 said "When my cross season is underway at a Vanderkitten, we have to come back here and celebrate with an umbrella drink." Well that special drink finally happened last night. We didn't get the umbrella 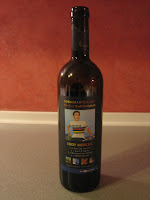 but we did get a glass of champagne! Oh, and did i mention i had some Eddy Merckx wine at Jan's that night? He also showed me a very cool antique Ekla jersey with the pocket on the front.

I'm not sure if I can help much with your social life, but I saw your name on the start list at Gavere, and I webbed my way here.

I'll be in Belgium for that and Koksijde. I'm pretty sure we have friends in common. (JB and AJ-M) How might one get in touch to say hello?

hey reeve: I do know AJ-M but not JB (or at least i don't know that person by the initials.) Maybe you meant to write BJ? Then i do indeed know him! You can find me in the parking lot - i'll be the one in the Vanderkitten vehicle covered in kitty heads with bloody teeth and a chunk of skin taken out of the corner of one ear. See you soon!

Just don't vamoose too fast. It doesn't look like I'll get there for your race, but kind of shortly afterwards. Do you typically hang out a bit? Dames race too early!

Gavere i may stick around for a few minutes afterwards but not koksijde. maybe see you soon.
:p'nut