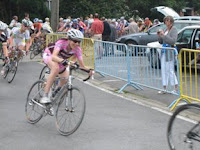 at a standstill for one hour - but it didn't seem that bad after having a decent day on the bike.

Yesterday i raced at Beveren-Prosperpolder in Belgium (near Antwerpen) and for the first time this road season the whole race felt easy. We did 90km at 2:12 (slightly 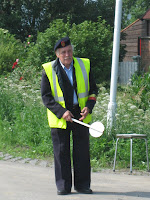 over 40kph) so theoretically since we were moving about the same 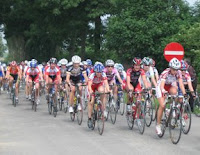 speed as all the other races, I should have been suffering again ( just the day before I only lasted five minutes in the race). But i really shouldn't question it. Rather i should be thankful that i actually had fun on the bike in a race again! 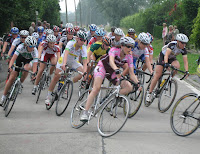 breaks. But since i was really not sure of my fitness I let the others finish the job for fear that i'd spend 30 seconds at the front then immediately pedal backwards through the peloton and be spit out like an orange seed. One of those breaks that went off the front actually stuck so i was in the chasing peloton. I was fine with that. Hopefully the day will come really soon where i am ready to test the body out by going with a break or even initiate breaks again - something i really 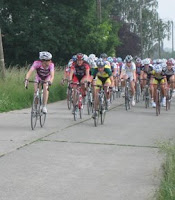 When the end of the race came, I did a semi-sprint and finished 26th overall which earned me a whopping 10 euros. I call it a semi-sprint because i was slightly overgeared and found myself having to push the bike forward with my arms! Quite comical looking actually. Again, fine for the day.

But the next race is another day which can mean two things, 1. I will immediately get dropped like what happened two days ago OR 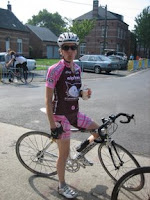 my body will be back to normal and i'll start playing on the bike a bit more! I'm praying to the bike racing gods that it will be the latter. 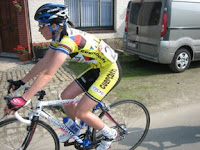 By the way, Sanne Cant was in yesterday's race as well. She looked good and even made it into the break that finished under a minute ahead of our peloton.

Usually after every race Jonas and i will have a picnic somewhere. This time an unexpected traffic jam decided for us. According to TomTom, the delay was supposed to be two minutes but it turned 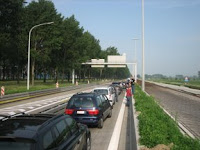 out to be an hour! We had pasta with garlic and olive oil, oranges, pistachios, grilled tomatoes and red onions with basil and avocado, and even a glass of wine.
Posted by PEANUT at 10:36 AM

C:
You look like you are having WAY to much fun out there! I recall finishing most Kermesses with my tongue all cut up from getting caught in my spokes due to dangling out of mouth most of the race =). Getting in the Prize is always good - Great job! Keep the reports coming..
MT

Thanks mike! I expect i'll be with tongue caught in spokes shortly - once i'm fit enough to stay with them when the pace gets that high! It does feel good to get anything back more than just the 5 euros you paid for the oversized overthick race number that breaks your pins when you try to attach it to your jersey.

Yes and the first year there I would always hve to beg someone for zip ties to get it on. Afterwards I would just yank it off, tearing the holes and the reg folks would look at you pissed and reluctently give you back 5 Euors. The next year I had a number plate that made things easy!

Hey Christine,
Your post keep getting better, and your picnics keep making me hungrier. I just got off work and it has rained all day pretty steadily. Your better than Velo News. I really enjoy getting to see photos of you and your surroundings. Jonas does a great job behind that camera. I will go back and read, but how long are the races generally? I get inspired to ride, and eat.... ha when I read your post. Keep them coming. Oh yeah, I stopped to get something to drink and I leaned my bike up out side the store. The wind blew my bike over, but it wasn't damaged, and I am very lucky. The wind has been almost dangerously fierce. It was funny afterwards because everyone I saw before I left for the rest of my ride were stopping to admire my road bike and commented on what a nice bike it is. I simply tell them thankyou and privately agree with them.
rickie

I think the 10 euros are "under the table" since they never asked my tax info. Now i can go back to USA and live like a queen on my earnings - $500 worth! Funny!
MT: They still give us those hard rubber numbers and sometimes it's supplemented with a hard plastic number that you zip-tie on the saddle/seatpost. We all have those seatpost collars on our bikes so we can just screw them on without zip-ties.
Dag Krist: Misschien volgende zondag voor een T.C. foto? Bedankt voor alles!
BGW: Actually i pulled a hissy-fit for the hour we were stranded on the highway but that doesn't make for wholesome blog reading. haha!
rickie: Today i made waffles (lower fat version) and pancakes. Served it with a plate full of various fresh fruit - melons, nectarines, strawberries, bananas and apples. I squeezed a little lemon juice over the fruit so it doesn't turn brown. Hungry now?

Hey, whats with the Swiss bike, aren't you supposed to ride your sponsors' bike :O