Time off to play at the Kermis

Last monday, I did something I hadn't done in years and years and 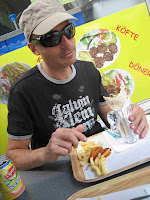 years...since my days as a carny. I went on a carnival ride.

We were in Zaventem (brussels airport town) to check out the Jaarmarkt (yearly market) in hopes of finding some treasures. I got a few girlie headbands, some birthday cards, a falafel sandwich, and anise. As we left jaarmarkt we took a stroll through the kermis that happened to be in town, set up just next to the market.

I got to relive some memories of when i worked at a carnival. My job was to run the 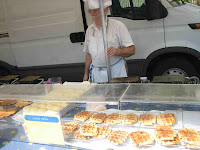 balloon-popping game. Even though it was a game where everyone wins a prize, I especially enjoyed pointing out the "large prize" balloons to the cute boys or to the kid who seemed never to win anything. 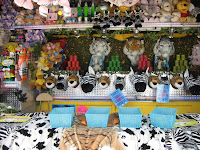 What i found most intriguing about the Belgian version of a carnival is that their games and rides all have some American Theme and contain some english words or phrases.

After checking out all the rides, I gave Jonas three to choose from.

The first was a "Caterpillar" ride where a top covers the "caterpillar" midway through the duration of the ride. 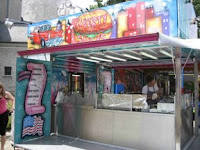 The second was a crazy-scary looking ride that had two long arms and has four seats at the end of each arm. The arms turn like 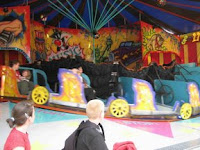 hands on a clock at a snappy clip, sending the riders upside down and spinning.

And the third ride option was semi-circle seats that twist and turn at mach speed, but don't go upside down.

He opted for the third one, probably because he was too scared to go on the second one and was afraid i'd try something on him when the caterpillar top enclosed us. 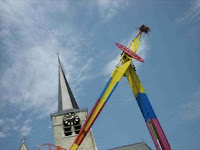 The ride was only about five minutes but my jaw and eyes hurt so much from simultaneously laughing and crying so hard. Luckily, I remembered my ride experiences from the carny days and opted NOT to close my eyes. 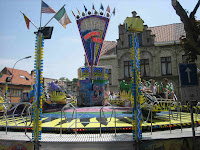 It may not have been the thrill I had from free-falling when i jumped out of an airplane but it was enough to make the rest of my day pale in comparison.
Posted by PEANUT at 5:04 PM

Christine,
Your extremely alive and colorful. I just love it. I'm glad you two had a fun day. I updated my blog with my evening with my sister. It was very enjoyable, but not as neat as that wild carnaval. Thanks so much for sharing.
rickie

Thanks! I'll check out your site right now.

I'm glad you got to listen to one of my piano compositions. The angle in the movie slide show is my estranged wife. I took one of her old photos of her at camp and gave her wings. I'm still having to deal with the loss. Sometimes life really sucks and a person just has to move on and try to learn from life. I guess in a way the creative part of the blog and music thing, and especially the bicycle is part of my attempt to survive. I enjoy meeting new friends and tying not to be full of selfpity, which for me, can kill me, so I try to avoid it. Thanks for sharing.
rickie

Hey Rickie:
The advice i give myself to get back on track is, "look where you want to go." (coincidentally this helps me in bike races too!) We create our own realities. Pretty deep for a peanut, huh. haha!