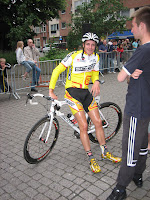 day. I guess I was so distracted by witnessing a car parked partly on a staircase and partly in a lake and later spotting the crashed plane that broke in half.

It was a mens "open category" event so of course the average speed was about the equivalent of my sprint effort. The course had just about everything you'd expect of a Belgian criterium. It had tight turns on cobbles, steep power climbs on crappy pavement, and fast descents - also on crappy pavement. 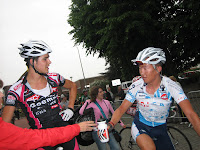 We went to watch Dries Dewit of Scott Racing (love the shoes) and Olivier (left) of Fietsen Goeman. Last year he spent the whole race in a break of about six guys but this year his teammate beat him to the break. His teammate and another random guy took off on a 2-man break that lasted until the finish. Luckily for the race sponsor 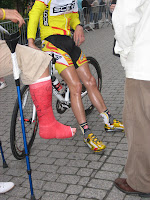 (Scott) the Scott racer won. Dries did a lot of work in the chase group to make sure that his teammate stayed away.

It was fun to watch these guys fly around the course but even more entertaining to watch the action at the start/finish. Every round, before the guys came through, the announcers would encourage the spectators to give euros for premies. Lots of the contributors got creative in specifying to whom the prize money should be awarded. Among many strange requests, I heard "20 euros to the guy who crosses the line 5th from last place", "7

I just finished watching Tour of Switzerland so I gotta get moving on dinner. I think i'm going to make spelt pasta (a gift from someone who thinks vegans eat expensive wierdo foods) with sundried tomatoes, mushrooms, and garlic sauteed in Greek olive oil.

One last note...I raced last Saturday, Sunday and Tuesday and made a whole 15 euros. But at least i'm now 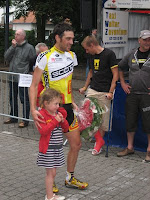 starting to get good enough to be in the newspapers again! Being humbled at these events until i'm back up to normal speed again is fine - i accept it. But i really do look forward to getting solidly to the point where I can stand there at the start line knowing my chances of winning are once again pretty darn good. What's the expression that i hate but live by? Oh yeah, practice makes perfect. There are two more "practice" events this weekend. I'm just not sure how they will turn out, but you can bet I'll be standing at the starts as prepared as possible in hopes that I am perfect. 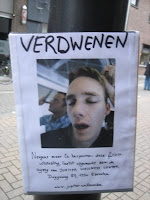 The "disappeared" poster to the right that was posted on a pole on the race course was a cruel joke played on the guy by his friends. I didn't find out if he was a racer in the event but I'm sure his buddies made sure he saw the poster that evening! Gosh, i've taken thousands of unflattering photos. Now i'm wondering if any of my friends had a good time with them!
Posted by PEANUT at 6:14 PM

Hey Peanut,
Another great post! The shoes are definitly cool, but so is the scott bike with the zipp wheels. I just got back from a 3 hour ride. It was good to get out. Part of my ride was on a dirt road that ran to a friends house. Some of the back roads here are nice, but one has to be a little creative to avoid fast traffic. Really enjoyed the photos. Let us know how things are going for you.
rickie

About the last picture, with the not so flattering picture of the guy: I don't think it's a joke, think it is an advert. If you read the text it has to be an advert.

I will try to translate it (roughly):

Nowhere to be found: This spiritless/drainend expression, last noted at the entrance of the Jupiter wellness center, (folowed by the adress of it)

So this is about the expression, not about the guy. They insinuate that he went in spiritles/drained, but came out top fit!

An other thing about it being an advert: besides giving their adress, they also put their website on it!

Have a nice day!

Thanks for the translation. I got the same thing but took it as a sick joke played on the guy because i can't imagine that a certified "zothuis" would advertise this way. Strange either way.
Thanks again.

Yeah but 15euros is getting bigger and bigger all the time (in dollars) :) Soon you'll probably have enought to retire back home on.

Did you win a prime or was the prize money for a placing?

As for the shoes, very 'Euro-cyclist', but I prefer white.

Good luck for next weekend and your 'practice' events. I am sure the word practice doesn't do justice to the level of effort that you put in, and it implies that you are a beginner. However, it is Cliche for a reason!

hey chr:
It was prize money. I have white specialized shoes and LOVE them. They look so clean and neat.
I use the word "practice" as in "practice makes perfect" and since i am still far from perfect it still falls under the category of "practice"! But thanks for the compliment!