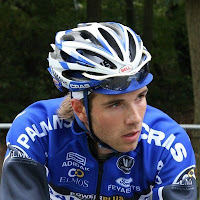 Niels Albert Update
Saturday, 22 November 3pm - Belgium time
As seen on Belgian TV
Photo credit: Victor Zandbergen
Right before the start of today's GVA Hasselt race, Palmans Cras Team Manager Christoph Roodhooft gave an update on Niels Albert. He said that Niels went home today from hospital in Herentals where they also found a fractured rib and the beginning of a lung infection which was caught in time to treat it effectively.
The rib fracture gives him the most pain.
He had to lie flat in bed for one more week, but then next Sunday he can start with aqua jogging - the only form of exercise he can do.
If everything goes well, he can go outside in four weeks at earliest. They don't know when he can compete. But when he does, he won't be in the shape he left the racing.
Sven Nys also had a few words to say about Niels. He said he contacted him a few times for moral support since this is an important time of the season to miss. He then added that it is always nice when Niels is there since it adds more tension.
Posted by PEANUT at 10:47 PM

Best of luck to Niels. I broke three ribs and a concusion once, and it makes it very difficult to breath for a while. Hopefully he can heal quickly.
rickie

Damn shame he's gonna miss so much of the season.

That Sven guy sounds so 'nice'.

Sven actually is nice, or rather he is a true competitor where he'd actually want the best to be present at every race to challenge himself. In all the years i've followed the guy (no, not stalked) he has always been that way.

Yes, Sven is a true pro in every sense of the word. He is an example to all.