I got back from NYC last Thursday and immediately back outdoors on the bike! Thanks to my 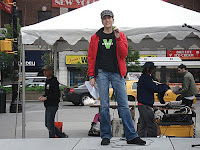 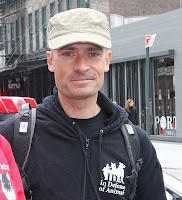 close friend Ronnie, i did have a bike and trainer in my hotel room so i could continue riding while i was there. Though what i wasnt prepared for was all the walking that automatically comes with Manhattan. Every day, Jonas and I (and sometimes Ronnie) did the gastronomic walking tour, hitting every veg restaurant and cafe along the way. Knish and pretzel stands were obviously included! Tiengardern was easily the best meal we had there. It is officially chinese food but i have never had chinese food that tasted so fresh and clean.

Parade day was a lot of fun! At the start, we were about a thousand people strong. Most came 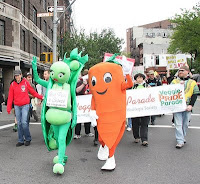 with costumes, signs or some other veggie standout. In comparison, i felt pretty underdressed with my In Defense of Animals (IDA) tee, long sleeve shirt, and sweatshirt. Worse yet, they put me in the front row as a Veggie Pride Parade banner holder. Although i felt there were a bunch of folks that could have dressed up the front row better, I was honored to be chosen. My arms, on the other hand, resented me for accepting the banner-bearing position. Every once in a while i had to 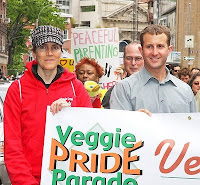 sneak out of the front row to shake the arms out. 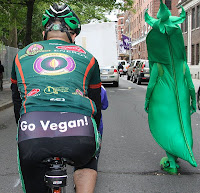 Among the dozens of colorful getups were the Meatrix couple dressed in full length shiny black latex coats, promoting their mission of awakening the public to the real truth, a boy holding a homemade sign promoting healthful lunches at schools, of course the peapod and carrot. But my top favorites were the many folks sporting IDA tops and pins. I was excited to see how popular IDA accessories had become!
Even though the walk was no more than a mile or two, I was famashed by the end. Immediately 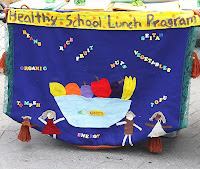 jonas set out for food...and returned a whole hour later after getting lost. Luckily for me though my neighboring booths donated sandwiches and drinks. I ate and drank so much that when jonas arrived with a stack of street pretzels i was full.
While waiting for my turn to talk on stage, i handed out IDA papers and chatted with folks mainly about IDA but sometimes about other random topics, some of which i had no knowledge. One gal asked me about turning her dog vegan, so of course since i am on the "information" side of the table, i gave her my authoritative opinion (based on what i read in VegNews Mag on the topic.) Another guy came up to me and just talked. I still dont know what he was talking about.
As for my speech, I think it went well. It felt good to talk about a vegan diet from another angle other than for the animals, like everyone else's speech. I never once mentioned "do it for the animals" so as to get the point across that a plant-based diet is a solid choice for health. I also hit on some other topics such as the simplicity of a vegan diet. No need to drink tofu, grass, seaweed shakes or eat foods you can't pronounce.
One of the opening lines of my speech was, " Twenty years ago, we never would have believed that all people would have the right to get married, including our LGBT brothers and sisters." Unfortunately, as most of you may know, last Tuesday the California Supreme Court upholded the ban on gay marriage. Good thing the news came this week and not last, because then i wouldnt have been able to think of this progress in a positive light.
After the parade, jonas, Emile from holland (now Spain) and I watched a video called "Meat the Truth." It discussed the impact of cows on global warming, something Al Gore failed to mention in his movie. I had no idea that cow farming contributed 18% to global warming versus 13% from cars.
For the rest of the evening, it was back to our usual walking tour for more veggie meals. We went to Pukk Thai for dinner, and Angelika's for dessert - both in the east village, my favorite part of the city.
The next afternoon, 400 VegNews magazines arrived at the hotel - one day late for the parade table. Instead of sending them back or tossing them (which wasnt an option), jonas and i took to the streets. We gave most of them out to the vegetarian/vegan restaurants mainly in the village, and the rest we handed out on the streets. It was amazing to see how people react to a free magazine. Few were thankful for it, while most either ignored us or looked at us like we are scammers looking for money. That was funny...but not.
Two highlights of the trip were visiting the MET to see all my favorites like the Rodin statues, 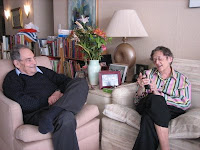 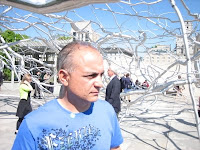 years while living in NYC. They are the most impressive couple i had ever met. they are i think 87 and 91 years of age, married and still in love for 64 years tomorrow, and full of more energy than even I! They work fulltime as special sales reps for various publishing houses mainly out of their home. And every weekend they head up to their summer home upstate NY.
As always, thanks for reading.
Posted by PEANUT at 1:59 PM

hi christine! my buddy just pointed me towards your blog and i just wanted to let you know that it warms my heart to see other vegan athletes out there racing at an elite level and doing so well!

Thanks Jess! I assume you are an elite vegan athlete? do you also have a blog so i can follow along?

Enjoyed the blog. Had a great ride today. Perfect temps. Started with three banana, half a quart of strawberry yogurt smoothy and coffee. Tomorrow I do a long ride, 60 or 70 miles. Not going to Tulsa to meet Liz. Just going to enjoy the weather and ride.
rickie

I am! I'm an elite amateur triathlete (if that makes sense) and a newbie Cat 3 road racer. http://jesslover.blogspot.com

Sounds like your trip to NY was a success! Hope you're enjoying the good weather this weekend - I keep looking at the blue sky with NO clouds and can hardly believe my eyes, it's so beautiful! Hope to see you soon!