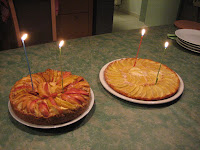 bet this is what Quick-Step Team Manager Patrick Lefevere is thinking right about now.

After a tour stage a few days ago, a reporter told Boonen that Lefevere said he is not good enough. Boonen replied, "Has Lefevere said that I am not good enough? Then he may come sprint himself." ("Heeft Lefevere gezegd dat ik niet goed genoeg ben? Dan mag hij zelf eens komen sprinten.") In response to this, Lefevre responded, "When i get paid a salary of Boonen, i would go there and sprint myself!"
I wonder what team he will ride for in 2010. He is Belgian National Champion, so surely there will be lots of offers coming in. Heck, if i had a team i would hire him myself! He's a colorful rider who can produce - just three months ago i clearly remember his hands in the air in the Roubaix track. He also won Kuurne-Brussel-Kuurne and a stage in Tour of Qatar.

On the cyclo-cross side, Bart Wellens is STILL trying to shake his jokester playboy reputation he acquired many years ago. While guest-hosting one of the Tour's post-stage discussions on TV, Wellens assured his fans that he is working extremely hard for the upcoming season, taking it very seriously. Everything he does is for cyclocross. All he wants now is for his fans to acknowledge his hard work and drop his old image once and for all.

Regarding the Tour, while watching Saturday's stage on Belgian TV, the race announcers were very confused by Garmin's move to the front of the peloton n the last 15km of the stage. They finally decided that there was no reason for them to be up at the front. Was it an American thing? Did they not want Hincapie to take yellow? i suppose only the Garmins know the answer.
"The Boss is boos" (angry in dutch) - was the title of the sports section of the newspaper a bit 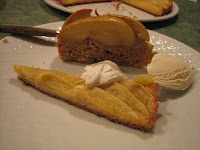 ago. I can say it clearly applies to Sunday's stage as well. If Armstrong really had the legs, he would have gone with Andy Schleck or the handful of other guys that jumped away from him after Contador was long gone. I wish Armstrong would have given permission to Andreas Kloden to ride his own race so he could have at least improved a bit on his GC ranking. I was glad to see Armstrong acknowledge Contador's supreme prowess. Armstrong may not be the strongest guy in the race but he did a very good job of bringing his fitness back up to the highest level after so many years off.
On a completely different topic, yesterday was my birthday. Here are photos from my birthday 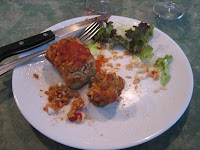 dinner at Jonas' parents house. His mom made a completely vegan meal. We had stuffed zucchini, salad, rice, champagne, wine and two apple tarts with soy whipped cream and soy ice cream. One of the tarts was made by her and one by me - can you guess who made which? Hint: mine was sugar and fat free.
Posted by PEANUT at 12:11 PM

Happy birthday for the 18th(?).
the meal looks delicious.

thanks for sharing your TdeF thoughts! :)

About 10 days late, but if I forgot to say it, "Sure am glad you were born." Have a wonderful day. Give Choclate and Coe Coe a pat on the seat for me and Nemo.
Rickie

happy birthday! hope this year is filled with good health, happiness and lots of mud.

Thanks for the birthday wishes!!