We set out for the race site very early last Sunday - 7am to be exact. I woke

up, took a quick shower and ran out the door. Breakfast consisted of a hearty bowl of cold plain pasta with sea salt.

Then it was on the trainer - inside the mobilehome. That was a funny experience. It felt like surfing on wheels - one hand on the handlebars and the other on a cabinet handle latched closed. The most trying part of the traveling warmup was the extended cobblestone road. It was bad enough to add a vertical dimension to the workout with the bumping of the 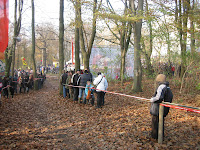 uneven road, but hitting those twists and turns were almost amusing. Both sides of the trainer took turns to be completely airborne for a few seconds.

We got there just in time to get in a couple of pre-ride loops on the course before the first race of the day began. 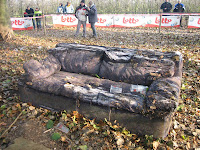 preride on one of my race bikes, but this time i opted for my training bike. Fifteen minutes into the mud expedition, I hit the "chute" for a second time. The chute was a steep twisty descent covered in deep grooved mud - a section that ended up taking out many of the top men racers later in the day. 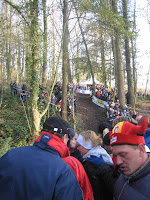 Halfway down the chute, I found myself in a groove that led directly to a tree - no way out. For the split second i had to think about the ensuing tree kiss, I gave some thought as to what part of my body i'd like to volunteer as the contact point. I narrowed it down between collarbone and head. Considering my head was probably stronger and more protected than my collarbone, i opted to go head first.

BAM! I must have looked like one of those tom and jerry cartoons where the impact is followed 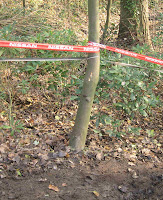 with the *@!?!@&*!. To make matters worse, some random guy continued the cartoon scene by coming to my rescue; he tried to get the bike upright while i was still wrapped around it.

Once standing, I assessed the damage - well, once my surroundings became light again! The crash left me with double vision, severe head pain, banged up quad and handlebar snapped in half. Even the tree suffered from my poor driving skills! (See photo.)

Somehow i made it back to the mobilehome. Moving in slow motion, I 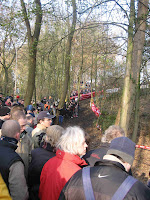 just made the start. It's amazing how long it takes to do menial tasks when you see everything in double.

Standing at the start line seemed like a dream - a bad one. The gun sounded and i took the right line up the side. But with less than vision and stellar sensations, i allowed myself to be forced off the good lines and into the deep mud ditch on the side of the course. It was in that few second time span that i was passed by almost the whole field.

During the race, my balance started to improve and I slowly moved through the field to eventually finish 12th. I even passed a gal who placed top ten in last week's World Cup. If only my sensations normalized 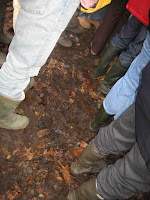 a bit earlier in the race. Or better yet, if that tree hadn't have been there. I've often told people, "If you look at the tree, you'll hit it." I wonder if that's why i crashed. Maybe if i would have put my head down just before impact, somehow the tree would have eluded me...hahaha.

Anyway, although my result was not what i expected, I got a lot of cheers for spending the whole race passing gals! I even got cheers from my competitor's crew (winner Katie Compton and Helen Wyman's supporters threw me a few kind encouraging words!) 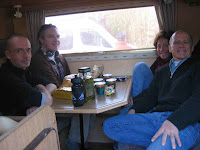 After the race, I headed back to the mobilehome for a shower and an impromptu lunch party. Reeve of Seattle and Gary and Betty of NorCal joined me and Jonas for some homemade organic Pumpkin, Leek and Potato soup served with fresh 10-grain bread from the local bakery to dip in the homemade rosemary olive oil with salt. And of course ProBars for appetizers, speculaas for dessert. 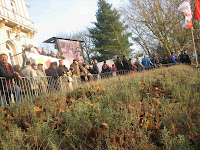 Later on, we watched the mens race. I hate to say it but i was almost thankful to see so many of the men crash on the chute. It made me feel like i wasn't as big of a loser as I had made myself out to be in my mind for biting it there.

We had two American men out there - Jonathan Baker and 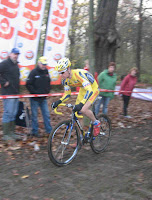 Jonathan Page. Both looked very strong. It seems Jonathan Baker is getting better and better throughout his european campaign. 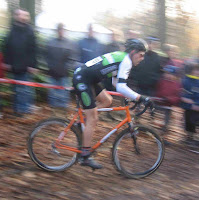 Unfortunately Page had a tough race with a bad crash. His bike was engulfed by the course marking tape causing him to waste valuable seconds trying to unravel it. His team situation must not help his racing much either.

As usual, it was amazing to watch Rabobank's Sven Nys massacre the field. Even with a string of

Fideas on his wheel, he chose the exact moment he wanted to leave...and left. He attacked on the extended power climb on the last lap. By the time he got to the top, he had about ten seconds on 2nd position Erwin Vervecken.

But the real hero of the day had to have been Fidea's Bart Wellens. Knowing that the only way to beat Sven is to be proactive, Bart spent the full one hour attacking repeatedly - a real brave effort that takes a lot of strength and determination to execute! Even to the very last meters, he was fighting tough to successfully get a spot on the podium.

Just before we left the race site, I arranged an interview with Bart that is scheduled for this 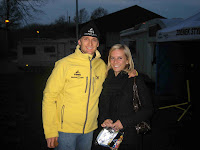 week. I'm writing it for a magazine. If you have any questions you'd like me to ask him, please let me know ASAP! He tends to make for a good interview, so I am really excited about it.

The photo is of him and his fiance, Lentel, to whom i gave a Vanderkitten/ProBar care package. I figured she'd enjoy Vanderkitten stuff more than he would. I could be wrong, though...

ps. B/W photo was taken by Krist Vanmelle and the pink one on top was taken by Ruben Verhaeghe. You can view the rest of his photos on his Gavere posting site or visit his personal website.
Posted by PEANUT at 9:02 PM

hmmm....well I guess you've left your mark in europe (ok, bad humor, its end of the work day here).

12th aint bad after a warm up like that....try and keep the rubber side down next week!

uhhh.....any chance you can make it back for the team relay race at the Peak Season CX in Jan...its the same day as worlds, but ya know..it never hurts to ask :)

...i heard the 'belgian green party' was looking for the hard-headed marin co girl who was trying to take out trees in their forest...
...jeez, joking aside, i'm glad yer a-ok, that coulda ended yer season right there...crashing off the bike is one thing but crashing into hard immovable objects is another...

...as regarding bart wellens: i'd be interested to know about his off (cross) season training...not rates & specifics so much as 'does he do road racing & at what level (club ? continental ?)& what length (stage or one day ?) beach running ? You cross racers are a different breed, as is the 1 hr hard sustained effort of a cross race, & i'd love to know more of how a top cross PRO structures his life around his season...a few roadies, john gadret, chris horner to some extent & a few others cross over but not like the days of the de vlaeminck brothers...

What are his thoughts about having a World Cup Cyclocross race weekend in the USA (such as in Providence). Does he see more European pros coming over to do races in the US like Vervecken did?

(BTW, I enjoy reading the blog. Have a great season)

THose are great questions for bart. thanks!

the one thing to avoid when riding down a steep section is to look where you DON't want to go, ie trees and stuff..
when the elite men raced the trees were covered with padding.
I don't think Vervecken came back from the States very happy.