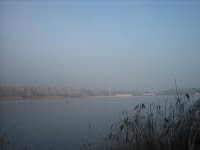 Funny, i forgot it was Christmas until I swung by my favorite bakery for 16-grain bread only to find it was GESLOTEN (closed.) When you spend any time here in the Flemish speaking part of belgium you quickly learn this word.

I checked out the Hofstade World Cup Course and it is a blast! Two extended sandpits - one through the pits requiring the ever-so-rare suspended-bike change, a few inverted bridges where you ride down into them and come up the other side, a bunch of singletrack (or one good line anyway), two small stair sections, some switchbacks and a couple of short powerclimbs, one of which is immediately after the start.

I took these photo on the path that follows the lake that runs alongside the course. The course is way in the distance of the bottom photo but just out of sight on the right side on the top photo. 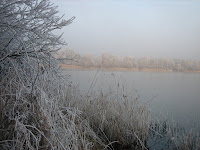 The weather was just under 40 degrees F (5 deg. C) i think, very little sun, and humid - the kind of dampness that just cuts through to your bones.

I made the warmup brief since i am still unsure of my health. But in that brief period of time, I spotted a few americans - Wendy Simms of Canada, Rebecca Wellons of the East Coast, Barb Howe of California, and Sue Butler of I think maybe Washington State. There were also a couple of others (i think jeremy powers) but it's so hard to recognize people when you don't see them every weekend like i would have had i have stayed put in USA for the season.

Well, I'm off for dinner - big bowl of whole wheat pasta with mushroom sauce, grilled eggplant, onions and zucchini, lentil soup, and salad. And for dessert, I made a sugar pumpkin. I just cut it in half, removed the seeds, placed it on a cookie tray face-down, and poured a little water in the tray. After cooking it for 35 min at 200 degrees C, it's ready. you can even eat the skin so be sure to wash the pumpkin before cooking it. I guess if i wanted to be a little fancy, i could caramelize some walnuts, and sprinkle them on top along with a little maple syrup and nutmeg.

OK, Christine, 'splain to an old fart like me what a 'suspended bike change ' is. Never heard of that one.

Enjoy your holiday! Even though you're getting this toward the tail end of your day.

Hey Ed:
it's a simple maneuver of holding the bike in the air so the racer can simply weave her hand through the frame and onto the inside drop of the handlebar so she doesn't have to immediately pick it up. This is used when the pit is located in a pure running section like a deep stretch of sand.
Happy holidays to you too!