Out on the Town - Leuven, that is!

Yesterday I tested my slowly improving health by taking a stroll around Leuven - my third favorite town in the whole world - or at least out of those i've visited. My first is, and always will be Manhattan while my second is Mill Valley, California.

Jonas and I took turns being tour guide for each other. I was up first so i got us lost about twelve times in search of little cafes i wanted to try. Unfortunately each time we found one of them, it was closed. I forgot Sundays are never good days for roaming around town. Well, we made the best of it once Jonas took over in guiding. We first visited the "Studio Brussel - Music for Life" which was set up in the square in front of the train station. It was a fundraiser set up by a 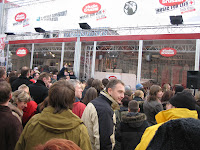 popular radio station (studio brussel) and Red Cross to help small towns with limited resources gain access to fresh clean water supplies. What was unique about this fundraiser is that their whole broadcasting setup - including the dj's were relocated from their main office in Brussels to a temporary glass house where they lived (without ever coming outside) for six whole days.

In addition to the stunt of living in that house for days without stepping foot outside AND without food (only juices), they raised money by using some other interesting methods. One was by asking for donations every time someone requested a song. They also got funds was by random belgians pulling stunts like building a pool in the back of a truck, then having a bunch of guys taking turns swimming in the back for a 100km drive to the glass house in Leuven. Even Johan Museeuw even took part by donating a frame to be raffled. I didn't realize he was making his own frames. Apparently he is not only making frames but using a material that is a combination of carbon fiber with the stalk of a flax plant. 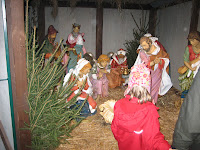 Today was their last day. Over 3,350,000 euros was raised (one million of which was donated by the Belgian government who offered up this money if Studio Brussels was able to raise over one million - which they far surpassed! It's amazing that such a tiny country can come up with so much spare change for this cause.

Even so, within a minute of staring into the glass house along with a few dozen other folks, we got bored and headed to Grote Markt in search of any festive events. All we found were two booths. One was a tiny manger complete with a mary, jesus, three wise kings display. But the other was a bit more exciting. They served waffles, pancakes, and smoutebollen. A smoutebol (aka oliebol - literally translated as oil ball) is a deep fried dough ball served in a paper bag filled with powdered sugar. You shake the bag to cover the balls with sugar before eating them. They are incredibly tasty BUT must contain at least 500 grams of fat per serving! We Americans know these treats under the name of Zeppole served at the little 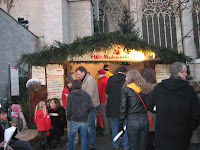 Italian Festivals that periodically come into town with games, rides and food. By the way, did you know that i was a Carny? Yes, i worked at one of those Italian Festivals when i was a kid.

Lastly, we hit a bagel shop that i was dying to try. It is called "Nosh" - located on Naamsestraat and prides themselves on having NY-style bagels. If i had to name one thing i miss most about NY i'd have to say a bagel!
As vegans, we had little - ok, NO option to choose from on the menu so we made up our own. Toasted onion bagels with tomato, red onion, arugula and mustard. 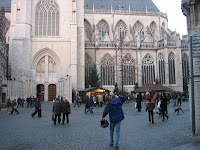 When they arrived I quickly grabbed it with both hands and immediately smacked it against my nose. I was expecting it to be as dense as a NY bagel but instead the bagel was actually white bread reshaped into a circle . It was so light that i miscalculated the effort it would take to lift it to my mouth. I must have looked like the biggest dumbass to Jonas as i stood there with mustard and tomato bits all over my face. Anyway, I will never ever go back there again. Instead next time when i want a bagel, I will make it myself - the old fashioned way - boiled and baked. 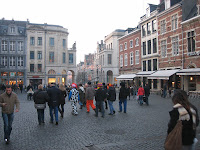 It is finally above freezing here so now the grounds are wet and i bet Hofstade world cup course is one big mudstrip. I plan to head over there tomorrow to check out the course. If it goes ok, then maybe i will consider standing at the start line Wednesday. Considering i've done just about nothing for two weeks now, I'm not expecting much. But even if the race is a bust, I have a post-race Vanderkitten Mobilehome party to look forward to!!! If any of you are around, do stop by! You can easily find us - our trailer will be the one with the huge-ass kitten head and the "Vanderkitten" banner across the side. Maybe the other American gals will stop by - hope so! That would be very cool!!! The gals expected at the start line with me (if i can make it) are Barb Howe, Rebecca Wellons, Wendy Williams and Sue Butler. The last two i don't know so i'm looking forward to meeting them.

Thanks for reading and THANKS again for the well wishes. It all helps!!
Posted by PEANUT at 1:32 PM

...peanut, my very best for the holidays & you getting fit & strong again...pass on a hello to that other cool marin county chick, barb howe & may you both do great...