What the Belgians are saying about Boonen

As you can imagine, the jokes have been flying around here in Belgium. Don't get me wrong, i do love Boonen. Heck, i even have a life-size cardboard cutout of him in my bedroom! But these are funny!

The top one is called "The new sponsor of Tom". (Het nieuwe truitje van Tom = the new jersey of Tom)
De Lijn (the line) is Belgian's Flemish bus company - probably

because he's off the bike and probably without a driver's license due to his DWI.

The one below was sent to me as "Promotie in den ALDI." Translated into "Promotion in ALDI" - a supermarket chain.
Vordeel Pack = Promo Pack
Boonen = beans

The third i just got from Johan. It's called Tommecoke. Below his tommeke nickname, it is slang 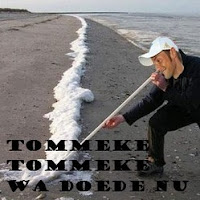 for "What are you doing now."

I hope they're still funny after my lengthy botched explanations.

And here are some one-liners as well:

- English class... Tommeke, how do you say hello to your team mates? Tommeke: "High!"
- This year, Tommeke will not ride the Tour de France, he prefers the Tour of Colombia.
- Who is the new sponsor of Tommeke? Coca Cola Company: "Taste the coke side of life"
- Boonen and Lore in Thaland. Says Tommeke to Lore: "I want a coke-o-nut."
- After being caught by the police, Tommeke drinks no alcohol anymore, he sticks to alcohol free coke-tails.
- Despite his recent drug problem, Tommeke is still an official citizen of Monacoke.
- How come Tommeke doesn't gain weight in the off-race season? He only wants diet-coke.
Posted by PEANUT at 9:51 PM

I'm guessing "The Line" has more to do with lines of cocaine than not having a driver's license.

You were a barfly in Manhattan. You should know this stuff!

OOOH. I HAVE ONE!

Why did Tom keep crashing his bike in the rain?

He couldn't stay off the white line!!

Belgians are certainly a colorful and lively bunch.

I'm in two minds about Boonen. He should STOP now looking for excuses, just confess he did some coke and get on with his cycling.
I hope he is not yet dependent on the cocaine, it IS a harddrug after all.

People always put coke in my coke when i'm out partying.

There is a TV show on cable in the US called "Interventions." It is a reality show about people with addictions whose families try to intervene to have them go to rehab. Last night, the focus was on Chad Gerlach, who used to be a pro cyclist with (among others) USPS and Sierra Nevada. He was addicted to pain killers, and then alcohol, and finally crack. Eventually became homeless. It was (pardon the expression) sobering to see someone who was such a great talent to have fallen so far. Hope Tom gets things straightened out.

BTW, Chad did goto rehab and has been clean and sober, enrolled in college, and back on the bike. You can check out more at:

That is a VERY sobering story. I can see the painkillers thing as a pro cyclist. Anyone who beats their body up day after day without allowing it to heal often relies on painkillers to get through the day and night. Thanks for the story.