Anatomy of a Legendary Fiets 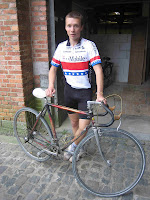 His name is Peter the Kid, my token American friend. His other nickname is Peter the Gimp. Although there is seemingly nothing gimpy about him, his bike is like a tractor trailer which keeps him from cruising along at supersonic speed when we ride together. This has proven to be a good thing these past couple of weeks since rest and recovery has been my number one priority. Every ride at piano (super mega slow - langzaam, lent, αργός (for my greek relatives)) pace.

But even with this lug of a bike (no pun intended), 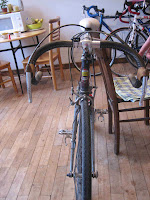 he is still able to ditch me at times. On our last ride, he just about gave me a heart attack. As i was riding up a long (for belgium standards) gradual hill - solo, because Peter took off ahead, I turned behind to check out the traffic situation. Instead of autos, i spot some helmetless yahoo chasing me down.

You can always tell the difference between those chasing you down versus those who are just riding at a clip (apace, snel, rapide, γρήγορα.) This guy was clearly intent on catching me. Sh_ _!! 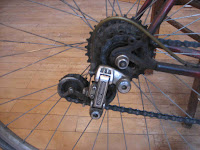 Just as I'm thinking, "WHERE ARE YOU PETER???" in hopes that he would act as a decoy so that i wouldn't have to engage in conversation on a day when i'm feeling particularly unsocial, the guy

Here are detailed shots of his antique bike more fit for a museum. I love that the bike is older than he!! 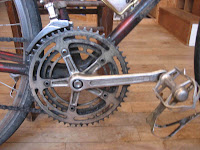 ABOUT THE BIKE
The bike supposedly dates back to early 1980's. 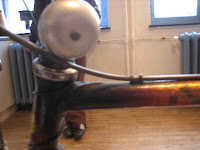 The rear deraileur is the first rendition of the shimano 600 (ultegra) group. According to my source, the same applies to the Dura-Ace cranks. And the brakes are apparently the first made by Campagnolo.

The handlebars are wrapped in its original leather sewn onto the bar.

I'm sure there are people out there who can tell me more about the bike and/or correct my information!
Posted by PEANUT at 11:57 AM

How about a little background on Peter. If he is american what is he doing over there? Philip

HAHAHA! OK, he is very belgian - born and raised in Leuven. I wrote that to annoy him. I know, i'm a good friend.
I just thoroughly enjoyed watching him get upset when a passing cyclist said hello in english - clearly directed at HIM while he was riding with ME, the card-carrying American.

That bike belongs in a museum. I'm sure it's the last of its kind :)
Could do with a little cleaning first though.. Nice story and some great pics Peanut.

thats where the bike comes from. The shop is still there.

Have you seen that race/ride they do in Italy every year, where all the participants bring the oldest bikes and gear they own?
It's like an antique race more than anything!

hey tuco:
I never heard about the italian race, but it sounds like a real spectacle!!