THE most famous showroom in Belgium 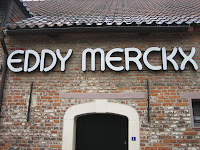 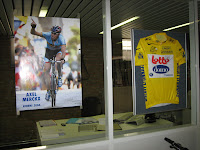 Yes, the Eddy Merckx Showroom located in a little town called Meise in Belgium. Eddy Merckx is, by far, the most famous Belgian of all time. (Yes, belgian, not just belgian bike racer.) Checking out Eddy Merckx showroom was a bit like the first time I got to see Joe Breeze's garage filled with all the random mountain bike parts and trinkets that were museum-worthy as part of cycling history.

Rumor has it that Eddy himself often walks the floor offering 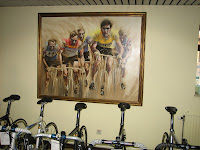 coffee to his guests. Unfortunately, when I was there he was off somewhere - i think it was Austrailia - watching his son Axel race.

BUT i did meet Eddy's wife. Before she surfaced, a random guy in the showroom forewarned me of her adimant stand on never talking to strangers. His words were something like, "don't even bother trying." Since I am a sucker for a challeng, the second she popped up on the floor, I b-lined right to her - which gave me all of about one second to think of an intriguing opening line. "In 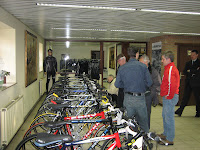 America, we LLLLLLLOOOOOOOOOVVVVVVEEEEE your SON!!" Well, it was worth a one-way ticket to open conversation! Easy as that. She was great. And from what she told me, her son is not only a cutie but a really superb creature.
Posted by PEANUT at 11:54 PM

hey! I've been there...weird when I saw the pictures I knew where it was...very cool!

we went upstairs to get my bib shorts...all the stocks upstairs

did you see him?