A day at the races

Last Sunday, I piano'd a few towns over to watch Jan race. For a devout mountai 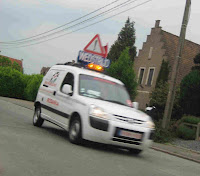 n bike racer, he sure has been doing a lot of "sissy roadie" events!! It was a 90km - 11-lap race. I showed up 1/2 hour into it so the race was in full action! Races here are like parades, first the road clearing guy goes past, then the advertisement autos, following is the lead moto or auto, finally the racers, and behind them the support vehicles.

As I watched them ride around in circles - w 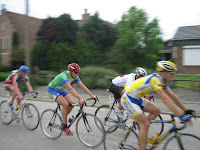 hile standing in warm sunshine i might add, I was painfully reminded that spectating is hard work. It took a lot of energy to keep focus on supporting Jan instead of obsessing about my designs of racing the damn thing myself. What if i just jumped in for a lap? Would they notice? I'll make myself really small by riding in the drops next to the burliest guys i can find. Can i really pull it off while 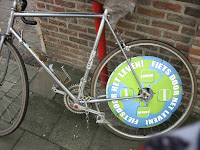 keeping my heart rate under coach's orders of 120bpm? Since i'm sick right now, i thought spectating would be a breeze. Not so. Frig!

Ten seconds after the field passed me for the last lap, the sky came down in the form of clear liquid pellets. But on the way home, the weather morphed back to a sunshiney day, ins 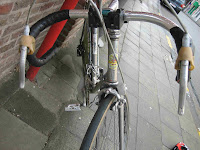 tantly cheering me up! The mood-altering power of sun - amazing. While meandering through Leuven, I spotted the coolest old-ass bike (see photos) and what i thought were more 24-hour tube dispensers. I was right about the bike but not about the dispensers. Turns out they are the traditional types serving up old-style rubbers - or is it new-style? I wonder which rubbers came first - the ones for bikes or for boys. 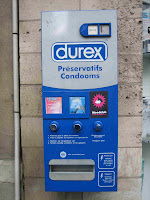 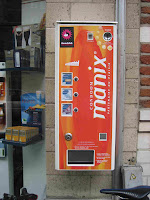 Earlier in the race, he was kicking his owBTW, Jan is the one farthest on the left of the photo - in orange with blue helmet.n ass by going with anything that jumped off the front. By the end of the race, he was licked! This photo was taken on the 8e of 11 laps.
Posted by PEANUT at 8:54 PM

What does it mean to 'piano'?

You won't be surprised I actually know Mr. Vranckx .. the guy who put his name on that bike..he lives in Haasrode. I had a "Vranckx" once, but it got swept into oblivion when a car crossed my path..
I hadn't heard of Monix before though :)

WOW, you actually know of that bike brand! Well i guess considering you live in belgium...
Soon i will be posting close-ups of Peter's bike - the kid with the gimp bike (one gear, poorly fit, flat wide heavy tires, etc.) It's pinned at mid 1960's.
Oh, and piano means to go SLOW!!! Musical term that cycling has made its own.

Moodclub? (question mark is right back at ya!)

but i dont understand what piano's have to do with slowness :-S

Hey captain b:
It's a musical term meaning to play softly. When used in cycling, it means soft on the pedals. Hope this helps.

thanks, now will you marry me?

Well, youre female, vegan, clever, good looking AND you seem to love riding a bike as much as I do... which makes you very attractive in my books...Unfortunately I'm just a pauper, a bum, a dropout, a misfit, a ruffian, so I wouldn't stand a chance with the likes of yourself... :-)

Hey Captain B:
OK, who paid you to say those kind words about me?!? Actually, i'd rather not know!!! BTW, loved your self description - those qualities can serve you well when used wisely (so i hear.) I'm actually into guys who drive fancy cars like BMW's (that's the one with the peace sign logo, right?)

You're right - some people actually pretend to be dropouts, bums, misfits etc. because it's 'cool', and it gets them lots of friends

I know a few people like that, they're just lazy people with well-off parents

BTW Christine, I could tell that you like men with big cars, it's really obvious ;-)

haha, love is in the air

Those Moodclub stickers are ours. Glad you noticed them!