You may not be able to judge a guy by his friends...

but i bet you can surely judge him by the apartment he keeps! I found 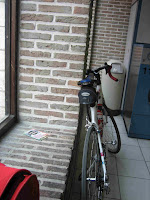 this out when i followed a guy back to his apartment.

OK, let me back up a bit. Yesterday, as i was sitting in the windowsill of the laundromat waiting for my clothes to run its cycle, a guy pops in to say hello. I met him a month ago at a salsa party and have been successfully avoiding him ever since.

Even though my friend and I are quite the crappy salsa dancers, we thought it would be a lot of fun to people watch. While we were doing what we do best, Mr. wonderful made a b-line towards me in an effort to chat me up. Following his "3 steps to score" presentation, he handed over his telephone number, pre-written - i might add - on a tiny sheet of paper, and walked away. I was so moved by his show of affection that i immediately buried it under an 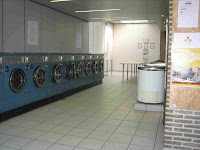 umbrella of a random expired drink.

About twenty minutes later, he was again buzzing around me like a gnat. This time he wanted to dance. I repeatedly told him that I cannot dance but it didn't deter him. Maybe he's into torture? His persistence combined with my friend's egging finally won me over. Within two seconds of reaching the dance floor, my dance partner exclaimed, "difficile, difficile!!" and walked away, leaving me solo on the dance floor. I looked over at my friend for consolation, but she was too busy focusing on NOT peeing in her pants from her gut-busting howl session. Yeah, whatever. Thanks. But at least i got rid of him...or so i thought. Another ten minutes later, there he was - in my face to make sure i didn't forget to call him.

Well i guess i forgot and now he was in the laundromat to find out why i didn't call. I told him i don't have a phone, so I couldn't call. Yeah, it's lame, but so what! He gave me his contact info again and left. Just when i shook the memories of his rank breath and ugly behavior, he was BACK! Unfortunately he caught me in the middle of sending an sms - yes on my phone - to a friend. "Oh, I thought you didn't have a phone," he exclaimed! "Yeah, well it doesn't really work. I only use it to send sms's." Good one christine. Let's hope he's a dumbass so you get away with that one. Yes, wish granted.

BUT my conscience got in the way and i fessed up. I told him exactly what i thought of his "difficile" exit from the dance floor and that i could never have anything to do with someone who would display such untoward behavior. After a bit of begging and pleading, he wore me down. I compromised. I told him i'd THINK ABOUT contacting him. Then he pointed to his apartment across the street and said that there is a very inexpensive apartment for rent in his building. Hmmmm... Right now i live just outside the Leuven ring. If i lived in his area, i could more easily walk to town instead of ride my bike or take the bus. So naturally, within two minutes we were entering his building. That is when i bore witness to the real him!!! GROSSSS!!! The apartment was dirty, decrepit, skank, and slimy. I 'd have even more descriptive words for it if i saw more of it, but his soiled clothing and old pizza cartons covered almost every single centimeter of the floor making it a little tricky to navigate through the apartment. And do i really want him as a neighbor? I don't think i want him or his rats, mice and other furry/shelly creatures coming over for playtime. As Tom and I sit on the couch looking out the window, we give thanks for what we DON'T have in this case.
Posted by PEANUT at 6:12 PM

Says a lot about the guy that he was willing to bring you to his apt in skanky,slimy,dirty shape! Ignorant or huge ego? Hope the weather is better then here in Vermont with rainy,overcast 45 degrees! Aargh, back to tights!! Philip

OK. the its' was just plain negligence. you must remember that the time it takes to write these posts is determined by how fast i type - and i'm a fast typist. THis leaves no room for grammar checking or even consideration to details about what i'm writing. Similar to just about every blog in existence, mine is a "pick a topic and go" approach. Yes, i know, very obvious indeed.

Oh and the maked happened when i gave the grammar a millisecond of thought - i changed it from makes to maked - hahahaha - when I meant to write made. See, that is what happens when i think. Bad, Peanut, bad.

Before “Elmo sees” what? The post looks reasonably grammatical to me. Still, I glanced only cursorily, being at the moment more focused on my notes for the keynote speech that I am about to deliver at this year's PMLA convention.
:Elmo