A member of the cross family in need of help

Back in 1998, I had my first introduction to cyclo-cross in the form of local San Francisco outlaw races put on by the DFL Cycling Team. The events were held in September, just before the "official" season started. They attracted some really wacky creatures, most of whom were cross-dressed in some rather odd combinations; maybe one guy would combine a mary poppins top with a full nightcrawler fishnetted bottom, while another guy would be dressed in a full-boobed bikini top and schoolgirl skirt complete with matching wig and makeup.
The "official" season in Northern California was very similar to the DFL races, but bigger and more organized; the events were just as lively and lighthearted but with fewer cross dressers. With this type of atmosphere, all newcomers like me felt instantly welcome! Back then, only a few of the racers had cross bikes. The rest of us showed up with our mountain bikes. Luckily, Joe Breeze - my sponsor at the time, helped me to equip one of my Breezers with a rigid fork so I had one of the coolest, lightest rigs on the local circuit! 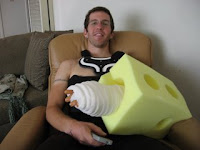 After a season of fumbling around the NorCal courses, doing the two-step remounts and smacking the barriers due to intimely dismounts, I felt i was ready for the National Cyclo-Cross series called The Super Cup. With two lessons from Coach Elmo where he replaced all my previous knowledge of the sport with correct info, I was on a plane - with my tiny borrowed cross bike - to the first Super Cup race in Philadelphia.
As you can imagine, the whole season was a humbling experience! Thankfully, I had a lot of support along the way. Coach Elmo continued to give me absolutely priceless lessons while other top cross racers helped me out with tips and advice so my learning curve was expedited. Among the many folks with much-appreciated advice were Mark McCormack, Tim Johnson, Mary McConneloug, Mike Broderick, Ronnie Pires, Ann Knapp, Dale Knapp, Mark Gullickson.
But the two who stick out the most are the Jacques Maynes brothers - twins Andy and Ben. Over the years, they have both taken the time to help me with my riding style, technique, and even mental approach to riding the course. Whatever information they had that would benefit me they shared freely. By helping me out, they were also letting me know that they believed in me!
Just yesterday, I heard that Andy had a bad crash during the last corner of the Memorial Day Criterium held May 31. From reading his "get well blog", it was a VERY NASTY smack directly into a lamp pole that left him with some serious body damage. Since I live in Belgium, I just heard about this!
Anyway, he is on a slow road to recovery so I want to publicly send get-well-vibes his way!!! Even though I'm on the other side of the world, I still think of him as part of my original cyclo-cross family!! I also heard that they are holding a raffle to help offset his exorbitantly high medical bills.
Thanks in advance for visiting his blogs and showing your support!!
Best,
Peanut