Yes, back in the good old US of A. For the few days leading up to my departure, I was mixed with emotions: sorrow because i am leaving my Belgian crew of Johan, Jonas, Pannekoek, Ronny, Jenny, Peter the Kid, Sharon, Hilde, Mark, Jan, J-Rocket, Reyad, Serge, Juris, and a bunch of other folks with whom I've become friends - I am also leaving my little shoebox apartment (sans Tommeke whom I folded and put in my bike box), excitement because i will get to see my good friends and train in one of the most beautiful mountainous locations in 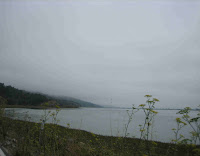 the world, confusion because i will be out of my normal daily routine that i've set up in Belgium, all mixed with a drop of fear because i don't know how it will feel to live in the USA again after spending almost nine whole months abroad.

My first flight from Brussels to Philly proved to be a nice transition. I sat next to a Dutch guy who was also a transplant in Belgium so we talked about Belgian culture from our outsider perspectives. We also engaged in the usual Flemish conversations such as ganging up on the French and the French-speaking Belgians. My favorite of his comment was his response to my confusion about all the unemployed French-speaking Belgians who live just next to flemish towns where there are plenty of positions needing to be filled. He said, "They 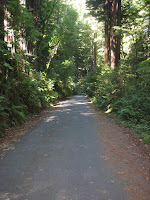 don't want the jobs, just the money." Harsh. I would guess his conclusion is based on their apparent lack of interest in learning Flemish, their country's other official language which is usually needed if you work in the Flemish-speaking section of the country.

Back in America, I was quickly aware that Americans slur their words! I never really noticed it before, but we are really hard to understand if you don't pay attention. Since i was out of practice, I had to ask the waiter in the airport restaurant three times to repeat what he said. It took me a few hours to adjust, but i am happy to announce that i am back among the ranks of the slurrers!

My first few rides quickly reminded me why I came back to train for the upcoming cyclo-cross season. Marin County has to 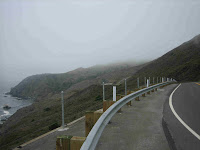 be one of the best places to train. The mountains, open roads, temperate climate, and somewhat bicycle-friendly environment - among many other assets - make riding a bike here incredibly ideal!!!

My housing situation also adds a lot to the ultimate training experience. I live with my friend Don in Mill Valley when i am back here in California. He eats 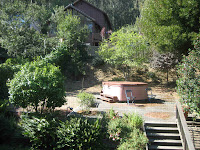 just like me (vegan and mostly organic) so our meals are superb. He also has a hot tub in the backyard and lives part way up the mountain so i get a bonus workout at the end of each ride - the street leading up to his house is almost seven minutes of climbing at 15% average gradient, reaching 23% in some places!!! I have been training myself to love the hill so it doesn't hurt so much - i'm not there yet.

Two months of this should get me in perfect shape to go back to Europe to face the strongest women cyclo-cross racers in the world! And the support of Vanderkitten, my new sponsor who treats me like a mud-princess, is the "cherry on the tart" - as they say in Flemish.
Posted by PEANUT at 7:50 PM

Is the photo of the unmarked lane in a woods somewhere in Samuel Taylor Park? I can't think of where else it could be. Welcome back, Peanut. Hope to see you out there on the roads and trails while you're around!
Ivymum

yes, samuel p taylor park indeed - where the temp drops a zillion degrees upon entering it.
The other photos are of bolinas lagoon and a view from highway 1 as i climbed out of stinson beach towards muir beach. Oh, and the hot tub photo is the view from my bedroom.
Peanut

Welcome back to Cali!

hey jonah
Shortly after i made the posting, i found out the hard way that the hot tub was not working. I headed out into the backyard with my birthday suit on, flipped the lid and took one step in and my foot froze. big-bad-bugger!!! ugh!! the hot tub people are coming early next week - not soon enough, though! Good thing we are having a heat wave!

cherry on the tart...

...while belgium is home to some serious-ass bike culture...
...doesn't california, despite it's problems, welcome you home to such a beautiful & amazing place ?...
...bet you're enjoying yer tam high...

hey bikesgonewild:
yes, a beautiful place indeed. haven't been to tam high though. I'm no longer into guys who are under 20 yrs.