Wow, it's an actual heat wave here in The Bay Area! In the past two days, i got more of a tan than i did all summer in Belgium!
Two days ago, I rode in the marin headlands offroad with my cyclo-cross bike. I had forgotten just how exciting it is to ride those trails. The views are just 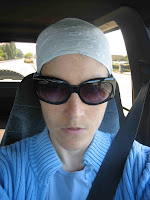 exquisite!
But what excited me almost as much as the scenery is the fact that i actually made it up all the climbs!!! The gradient alone of the steep climbs in the Headlands which hit about 20% would have been challenge enough for me considering i hadn't been on anything this steep in a long, long time - although there was the ride up the Koppenberg last month! But added to it was the dustball quotient on the trails due to the few-month drought and the recent re-grading of the trails. Wow, it was a real balancing act to stay on the bike at 5kph (3mph) for 15-20 minutes at at time.
I was also glad to have survived the tricep pain of having to tug on the bars with the arms ever so slightly bent in order to scoot back far enough on the bike to keep the rear wheel on the ground!! Note to self: next time, be sure to replace the bald tires.
I started my ride from the Tennessee Valley Parking lot in Mill Valley and headed up Coastal Trail, down to Muir Beach, up Highway 1 overlooking the Pacific Ocean, continued up Coast View Trail which has the most breathtaking views of the area, back down the trail, up it again, back down all the way to Muir Beach, up Green Gulch Trail, along Coyote Ridge, and back down the trail to the house. For those of you who've never ridden in this area, I HIGHLY recommend it!! It's definitely one of my most favorite places to ride. It is even more picturesque than la Roche en Ardenne (except for the castle) and most of Switzerland - if i dare say so!
Yesterday, I was kinder to the cross bike and kept it on pavement. We went up north through the little towns to Pt. Reyes so i could visit my favorite bakery - the Bovine. But don't let the name fool you - they have quite a few vegan 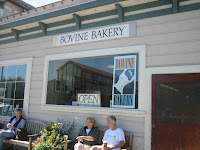 pastries! My favorite is the morning bun. But since it is only offered on weekends, i had the maple oat cookie instead - YUM!! Then we headed back towards San Francisco via Highway 1. Again, i was treated to the most amazing views. Even though the ride was a little challenging due to the exhorbitant amount of climbing, i was like a little kid in a candy shop (OK, i guess i would be just as excited to be in a candy shop at my age!) Anyway, it was a blast to ride through familiar territory. I even got to pee behind my favorite bush.
Right now i am just finishing up this Sunday's article for the Marin Independent Journal (I am a columnist for them.) It's on "Don't ever lend your bike stuff to others." I recently lent my fixed gear - which i thought was indestructible - to my best friend. Turns out i was wrong - it was destroyed in more ways than i thought possible! Hopefully my experience - along with my tips to avoid uncomfortable situations like these - will prove useful to others.
And after that, I am meeting with my #1 sponsor - VANDERKITTEN! Hope 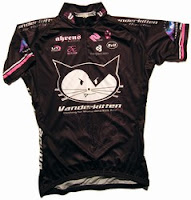 they bring me one of those cool jerseys they sell on their site! It will be the first time we meet in person. It almost feels like a date - nervousness, not sure what to wear, etc! How exciting! Actually - now that i think of it - dates are a lot easier; you just have to show up in any old clothes, bring your popcorn and watch him perform for you. And if you like what you see, you can stay for the encore!

Above is a photo of me on my way to get my haircut by Maniche in Bon Air Beauty Salon. I was so afraid to go to a haircutter in Belgium where they straight-blade your invisible beard and send you off with a mullet, that i waited until i returned to CA. I guess the photo would have been more dramatic if i weren't wearing a head scarf.
Thanks for reading!

Check out those shades! Awesome. But are they bigger than Elmo's? Hmmm, I don't know… it's too close to call.
-- E.C. Chamberlain

Jeez -- I saw your article in the paper about the fixed gear bike that was trashed. That is depressing! I once lent a van der Rohe "Brno" to someone while I had to be out of the country for a long period. Why put it in storage if it could be loved and appreciated by a good friend? When I came back, I found that she had PAINTED the metal frame in a color that matched the walls of her flat! Luckily I was able to remove the paint without a trace cuz she hadn't prepped the chrome at all. I don't think she ever did understand why I was upset. Recently she returned from a trip to Germany, where she had visited the Vitra and had seen one these chairs in the collection. "Hey, I saw your same chair in a museum, how funny is that?" I felt like saying back, "Oh, yeah, and painted to match Frank's walls?" But I kept my mouth shut -- supposedly friends are more important than furniture.
-- ivymum

i must have gotten distracted by something on the old man ride last month, because as we were talking about first dates (blind, internet, or otherwise) i kept picturing this fellow i spotted in front of the art museum steps in philadelphia.

obvious blind date, but an early one. i was meeting a group for a 10am ride and noticed him almost immediately amongst the people running up the steps and jumping around like wimpy Rocky's. heavy, bow tie, glasses, a bouquet of flowers, and standing at rigid attention facing the parkway. a little sweat from standing in the sun and being nervous, and shifting his eyes slightly from right to left to look for his date. he would focus on a woman as she sorta moved towards him, but she'd only keep walking by and up the steps. i was there for about 20 minutes and didn't see anyone show up. i felt so bad for him.

as i rolled away with the group i kept looking back to see if she would show up, but we finally turned a corner and he was gone. i'm hoping his girl showed up, but i fear she may have spotted him from afar and split.

They are not bigger than the shades i gave elmo many years ago on one of my trips to the East Village (NYC.)

Hey ivymum:
That story made me laugh (and cry) so much it hurt!! THanks for sharing.

hey joer:
What's up with the story that doesn't make sense? was it supposed to be related to the posting? It's a great story but i am confused.