I am not easily impressed...

old guys ride. As we approached an overpass, he jumped the field and gained a bunch of meters within five seconds. Once he crossed the virtual sprint line at the top of the overpass with a huge-ass gap on the field, he slowed down so the peloton could swallow him up. My hero.

Unfortunately just as the riders caught up, the "ring leader" ripped him a new a_ _-hole for disrupting the steady 28-30kph pace they always keep. As the guilty party passed me on his way to the back of the pack, i jokingly mimicked the ring leader's berating. He turned to me and said, "I was feeling good so i gave it a go." Again, my hero.

Last Tuesday, towards the end of the old 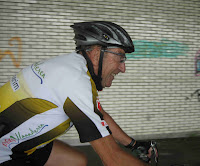 guys' ride as the riders were peeling off one by one, a rider attacked the field, got a gap, then pulled up to a cafe, dismounted and walked in (surely for a beer) just as we passed. For a split second I wondered if he was my long lost hero of last year.

It turns out it was the same guy! Now that the ring leader retired from the ride since he could no longer keep up with the pace or continue to slow the riders down to accomodate his gradually slowing pace, the

rest of the riders were free to have fun! And that was exactly what this feisty rider did.

Two days later, I saw him again on the ride. He was everthing I imagined him to be - total stud!! His nickname is Bonaventure (good adventure), 74 years old and in fabulous shape! Just before I snapped these photos, he turned to Eye Candy and firmly professed, "I am strong as iron - strong as a lion." My hero.
Posted by PEANUT at 9:45 PM

At least he's wearing a helmet. I see at least two guys in that bunch riding without.

I was supposed to bring him a copy of the photo i took but it has been crap weather here - the guys don't show when it is raining. I don't blame them though. A kasteel bier does sound more appealing than getting cold and wet for 3 hours.

hahaha..you'd love the track here, there's a bunch of guys over 60 who battle it out. =)