Pizza in Italy was just as i expected...

scrumptious! I've been to Italy two times before but never had the chance to eat pizza. The first trip was with the US National Team for World Championships in Monopoli (southern Italy near Bari.) We stayed at a hotel remotely located at the top of a hill and reserved for just us Americans. It may have been renamed "Hotel America" since we didn't really get to eat traditional Italian food or have much interaction with Italians other than the hotel staff. OK, that's not entirely true. At every meal, we were given a bowl of those hard circular breadsticks and on special days there was a tiny bit of pasta laid out in the buffet which was enough to feed 1.5 racers. 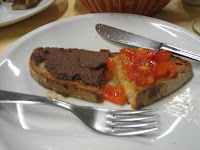 HAHA - i just remembered our first few meals there. The wait staff served us as if we were a bunch of high class sedentary folk. The food came in multiple-course style and each course was so miniscule we were afraid to eat it for fear that it will make us even more hungry because it was just a tease! Eventually the National Team staff got them to agree to half-buffet/half course style...so we half starved!

And my second trip to Italy was last year in an attempt to race Treviso World Cup. My supporters and i left a bit late for Treviso due to work obligations on their part. The trip should 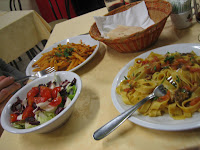 have taken only 12 hours but it was extended by an additional 20 since we took the long way to avoid the Swiss toll AND the car broke down! I arrived at the start line 5 minutes too late. Immediately after the race, we headed back home. No pizza.

But on my last trip, I was determined - if nothing else - to have my pizza! The night before the race, Jonas and I walked down the block (he walked and i rode because the jostling from walking hurt my head) to the one of three stores in town - a pizza place. We were so excited to eat italian food that we ordered every vegan item on the menu! 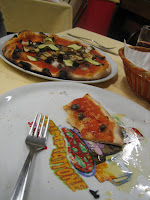 The meal started off with 1/2 liter of Chianti of course. Then onto the toasted bread, one with olive spread and the other with tomatoes. The olive spread tasted so fresh as if they just pulled the olives off the tree, cured them (or whatever process is done to olives) and spread it on our bread while we waited.

Next was the pasta. We had penne arrabiata and linguine with tomatoes and mushrooms. The 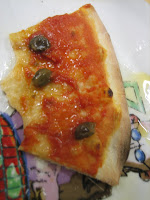 flavors were so rich compared to what i'd expect to eat in Belgium where the food is usually bland. Most meals don't even have salt!

We at the pasta with simple salad to which we added olive oil and vinegar.

The pizzas were so good that we had almost eaten the first one with capers before i remembered to take a photo! The other pizza had various veggies like zucchini, mushrooms, red leaf lettuce (i'm still trying to figure out this last 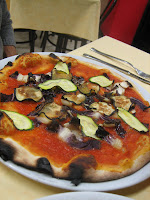 They had some incredible-looking desserts but i doubted they were vegan.

One other food treat we had on the trip was something I also always wanted to eat - a pretzel in Germany. On our way out of Germany, on route to the Hospital in Belgium, we stopped off at a gas station/convenience store. As we were entering, there was a kid walking out holding an extended hot dog that was teetering on a mini-bun. I took this as a good sign that we may be in luck. And there they were, in their traditional glass case on the tabletop. With pretzels in hand, I was overwhelmed with fright - do they have mustard? How do you even say mustard in German? Then out of nowhere, Jonas opens 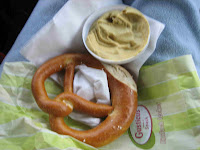 his mouth and asks the cashier in perfect German, "Haben sie senf, bitte?" The guy pointed to two giant pumps, one labeled senf and the other ketchup. SCORE!!!

At this very moment, I was scheduled to be in the air en route to Kansas City. Although i am still highly disappointed, my perma-headache reminds me that i made the right decision. Thanks ALL for your supportive comments. They really help to lift my spirits! And thanks LIZ-Kitten for your kind words as well.

According to the many emails i received, Kansas City is getting hit with harsh winter weather. When i raced in Kansas City a few years ago, many riders were treated with hypothermia. I hope it's not as bad this time around! Their weather makes our slightly below freezing weather seem like mid-summer.
Posted by PEANUT at 12:42 PM

Probably not red leaf lettuce, but rather radicchio

...looks de-lish but i need ta get my winter butt out on the bike...then maybe a little linguini & then perhaps some...arghhh.....

Yeah, radicchio. That's it! Yes, eggplant too. I ate it so quickly that i forgot about that topping. Hey bikesgonewild, the food was low calorie and fatree. NOT! haha. But it did taste really really good.

Man I love Italian food. For vegan food it's probably the freshest, most delicious and the easiest. For higher protein dishes however, although I have had some really nice Italian soups, salads, bakes etc. with various legumes, Indian cuisine is my favourite for its lentil and chickpea dishes.

BTW when it comes to crispy but soft pizza crust, mix 50% strong white bread flour with 50% fine semolina (semolina flour), and roll it damn thin. Cook at 300°C for 8 minutes. The best!

Thanks doom! I will try the pizza recipe next time i make pizza.

Of course, knead it a bit and leave it to rise before rolling it. Once rolled, leave to rise again before putting the topping on.

My local italian restaurant has a proper brick oven that cooks the pizzas at 400 dec C for about 6 minutes, maybe less.

I am surprised and jealous that messenger of doom has an oven that goes up to 300 - he is lucky - most I have seen only go up to about 240.

now i'm inspired to make pizza this week. My oven also goes up to 300. I suppose it is for safety sake - maybe there is a belgian limit on ovens unless it's a professional grade oven with thick insulated walls?

oops... with regards to flour mixtures, I'd stick with a maximum of 33% semolina flour. I normally use about 20%.