Sorry i haven't posted in a while but this time i have a decent excuse - or rather two of them! 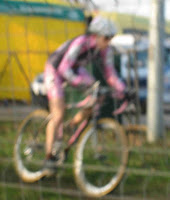 at best. I'd write a blog entry only for it to be erased due to the loss of internet connection when i try to post it. So i'd write it again a few times until finally coming to the realization it just isn't going to happen.

Second excuse is that I have had a concussion for many weeks now which has made sitting in front of the bright light of a computer AND having to string words together to form coherent sentences a tall order. In fact, the symptoms of the concussion have become increasingly worse the more i ignored it. Funny how that happens. In hindsight, i suppose racing in extreme pain where it feels my head is going to explode combined with the excruciating ear pressure and funky vision problems was not the wisest move.

Anyway, after a rather uncomfortable 40 minutes at the Milan World Cup where i only placed 21st and a dnf at (while i was in top 10 BUT in a world of pain to do it) we drove 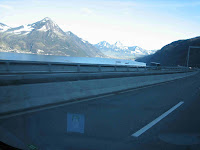 directly to the Emergency Room. After putting me through a series of tests, the neurologist handed me strict orders to stay away from hard efforts on the bike until all symptoms go away. He then added that under no circumstances am i to get on a plane to contest US Nationals this weekend. You guessed it...I cannot be any more disappointed than i am right now.

But on a positive note, the doctor said that if i do the twelve items on his "recovery protocol" list that i could be ready to race again as soon as 21 December. I really really look forward to racing hard again without having pain force me to lay off the power as i've had to do for the past weeks! I will be able to GO, GO, GO!!! 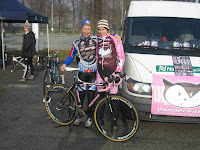 tough. I learned a couple of days ago when i broke the news to Vanderkitten that they are behind me 100%!!! I received the sweetest, MOST SUPPORTIVE email from them that brought me to tears. Just like Jonathan Page, I know exactly what it's like to race for big pro teams and i can assure you that you can never expect an email like the one i got from Vanderkitten! The incredible support that Vanderkitten gave me makes me even that much more inspired to return to racing with a vengeance and snag those top results I know i'm capable of. And if i didn't already have the full Vanderkitten collection, their note would have also inspired me to order their clothes in a show of return support! THANKS VANDERKITTEN!!!

Even though last weekend's event are far in the past, below is the one entry of many lost in 's intermittent connection that i managed to somehow save. Since i already typed it, I figured i'd post it anyway. More Milan stories and photos to come in the following days!!

The drive from to took us 12 hours - a very long haul! Or rather it was long for 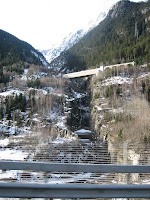 Jonas. To me it felt more like seven since I slept for the first five hours - from 5 to 10am. Unfortunately my first experience upon waking was using a toilet in a rest stop - in !

For the most part, the French seem like civilized people, but somehow their toilet apparatus was overlooked. French toilets vary from a severely pared down version of a modern toilet (no toilet cover or rim for sitting) to a simple hole in the ground with feet outlines showing you where to squat over it. I've never really mastered the art of squatting since I grew up in civilized America where it's not necessary - unless you become a mtb racer, so these French holes are always cause for concern. I have no aim. (I just remembered a joke I’ve heard many times - why do the French use a plural noun for the word "toilet"? Because you have to go through many to find a clean, functional one.) 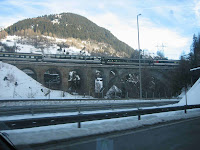 Once pee'd, I was ready to take in the views of driving through , and . In we have not seen the sun in quite a few weeks so you can imagine how incredible it felt when we finally drove south enough to find where the sun's been hiding. It felt so good to have a warm face that I couldn't bring myself to wear sunglasses for fear that a few rays would be deflected. Considering my eyes are super-sensitive these days because of my concussion, my lack of lenses prove just how sun deprived we’ve been here lately!

As we drove through , we had matching perma-grins checking out the snowcapped 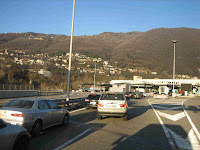 mountains with little towns and lakes scattered about. I tried to take as many photos through the window but in a huge-ass van it's not really possible to hang your head out the window without the wind pulling you completely out and onto the pavement. Needless to say, most of my shots were instead taken through the windshield.

We arrived at the hotel just as the sun was setting. After a long trip, we were thrilled to 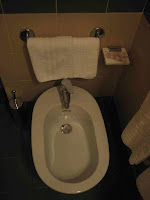 find that our hotel was on the nicer side. The rooms even come equipped with something I’ve had on my Christmas list for years – a bidet.

The next morning, we arrived at breakfast just before closing time. When you're vegan, you never have to show up early for buffet breakfast because all the plant-based stuff will surely be there. And we were right. It was a huge 'American Buffet' with various sausages, cheese, ham, bacon, beef, scrambled eggs, hard boiled eggs, croissants, cheese and cream filled pastries, apple pie, apple crumble, apple tart with cheese, apple tart with cream, cheesecake and 12 variations of yogurt - all items almost gone. But found in ample supply was the Italian rolls, fruit, jam, muesli, focaccia, tomato slices, water and espresso. The biggest score had to have been the individually packed wholemeal rye bread - you know the mealy dense moist bread found in , , etc. Yum! 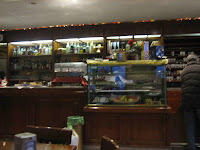 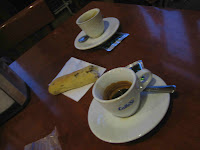 Shortly after breakfast we rode around our miniature town of (20km outside of center) to check out the stores - all three of them. There was a pizza place (photos to come of our pizza, etc), a cafe and a mini clothing store for geriatric women. Our location sucked for touristy stuff but 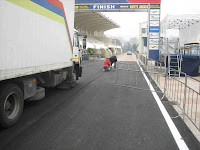 we were across the street from the World Cup course, which is where we headed directly from our brief outing through town.

I wasn't sure what to expect this 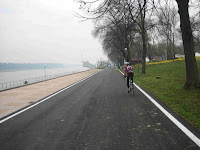 course to be like before arriving. The only bit of it I saw was on a youtube video taken last year where heavy rains turned the course into one big bowl of soup. We were thrilled to see that the trails were bone dry. 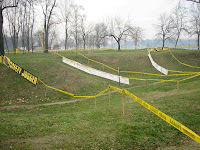 It starts off on pavement, then bends to the right onto a wide trail. Within a minute, we will all form a 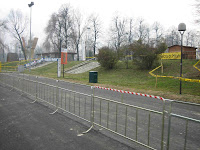 pile-up on the narrow, short steep runup. Then it's back to wide open bumpy trails until the "bowl" where you ride down into it, making sure you take enough speed with you to get back out on two wheels. Again, more wide open bumpy trails until a tricky tight right hand bend into a very short steep uphill - rideable if you pick the line just right. Then more open trails, back into the bowl two more times, over to the down, stair runup, down, up, down, up 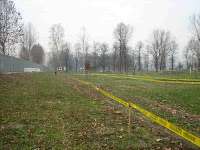 I pray for dry trails tomorrow so post-race cleanup is minimal since we drive directly to from here for another UCI race Sunday. We were originally going to make the trek to for a Sunday race but when the men’s event was canceled here in , the organizers 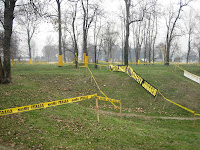 moved the women from 11am to 2:30pm start, which would have put us in at 4am. Frankfurt is 3 hours closer and the start time is not until 1pm - as opposed to the start at 11am. From what I heard so far, many women made the same practical decision as I so Frankfurt may just be more star-studded than . That surely helped to solidify our decision to go to Frankfurt as well as the free hotel accommodations that the race organizer arranged for us!!

Peanut,
So sorry to hear about your injury and not being able to attend Nattys. I know this is a huge blow to you but just know that we are all BEHIND YOU! Vanderkitten is so stoked to have someone as passionate about what they do, racing for the team and part of the fam. Heal up and get back to kicking ass!

THANKS LIZ! Your words mean a LOT to me!

i can't believe it took this long for you to realize how serious your concussion was.

i hope you have a quick 12-step-program recovery to kicking ass.

...well, kiddo, sounds serious enough for me to not wanna make any bad jokes, huh !!!...glad you now know what's up, so as to not exacerbate the problem (any further !)...

...not sure if ya saw but "bobkestrut.com" (click on the top title photo) has a coupla nice pics of you that peter shot when he was at k-sijde...good stuff...

...anyway, as one a' yer many on-line supporters & livin' back here in good ol' marin, you know i'm sending my best to ya...

...i've said it before, i'll say it again...you've shown the initiative to live & race far from home, in a non-english speaking country...that is admirable & i, for one, am a fan...

...so, despite the problems, stay strong in head & heart & when the time is right, hey, ride smooth n' ride strong..

Thanks for the photo bgw. cool! And m-coco, glad you got the 12-step joke. I guess in hindsight, that wasn't pc of me - OR you for pointing that out.