My recap below of Frankfurter Rad-Cross last weekend will be shortly posted on Cyclocross Magazine. But for the moment they are focusing fully on US National Championships being held right now in Kansas City, KS. They even have life feed of all four days. Needless to say, I am not there. I am saving myself for the win next year! (Positive attitude has created a lot of miracles so why not think positively?!?) 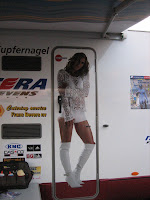 Last Sunday I raced at Frankfurter Rad-Cross in Frankfurt, Germany. Even with its UCI ranking, an event so far from Belgium should theoretically produce a low-key turnout, but instead I lined up alongside superstars like Hanka Kupfernagel, Pavla Havlikova, Sanne Van Passen, Reza Hormes-Ravenstijn, Helen Wyman, Gabby Day, and Marianne Vos. Yep, child prodigy herself – before reaching twenty years of age she had already earned World titles on the road, cross and track. After her recent addition of Olympic champ on the track, she took a break from competition. It was her first cross race of the season.

As Vos was parked next to us (and Hanka), we caught up a little before 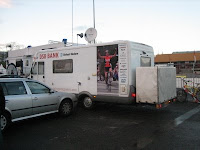 starting our warm-ups. She confided that she was actually nervous about the race. It is always nice to remember that even the top athletes get nervous like the rest of us.

The Frankfurter course venue was located in the parking lot of a skating rink so while we got ready to race, a steady stream of metal blade-equipped kids with parents in tow weaved in and out of the cyclists’ mobilehomes. The race course itself was a special one. It was laid out in three tiers of varied elevations, where the riders repeatedly rode or ran from one tier to another.
It started off on a paved section with U-turn then direct to an extended staircase. It was a step-style design with mini platforms separating short sets of stairs.
The last two staircases had concrete ramps on the left side so the

cyclists could opt to ride them. The drawback to riding them was that if you fell over , you landed on concrete stairs which can be painful and, more importantly, time-consuming. I found this out the hard way when, as I was riding in the middle of one of the platforms, a spectator walking down the stairs decided to jump onto the platform to get out of my way. At least I think he did it out of kindness rather than malice. He looked a little too old to be dating the gal just ahead of me.
The staircase then dumped us off at a small but steep power climb on slippery grass. Once at the top tier it was fast riding past the pits, onto pavement, then down to the second tier via a greasy grassy descent. Shortly thereafter we went back up to the top, immediately back down, up and down one more time, again past the pits, before returning to the bottom tier to swerve through the parking lot and across the finish line.
I had a great callup alongside Hanka Kupfernagel. My luck lasted

for twenty seconds after we took off. By the top of the staircase I was second to last place. Shoot, my painfully extended yet humbling recovery mode is not over. They say that when your body is fully recovered from a hard training period it feels like a switch is flipped (that turns on your central nervous system) allowing you to ride hard again. As the field rode away from me, I could tell my switch was not flipped. But a few minutes later, something flipped on. It was more like a dimmer switch, though, where I could partly function, but was still mostly left in the dark. It was thankfully enough to

start passing people. It felt good. By the end, I was up to 13th place.
As for the rest of the gals, Marianne took the early lead before Hanka caught up to her. They then rode the next few laps together with Pavla trailing in third. Eventually Hanka got away to ride in for the win solo. Marianne crossed the line in 2nd ahead of Pavla. Helen had a great first half of the race, riding in 4th with Sanne and Reza before she had to let them go. The two Hollanders finished in a sprint with Reza taking the glory for 4th.
I ran into Marianne after the race and she was quite pleased with her result. She plans to race the rest of the season through World Championships. Last year my guess was that she would have won World Championships if she didn’t have to spend all her time and energy catching up to the front of the race from her last row start position. If there would have been another lap, I would surmise that her second place would have been gold.
As much as I would love to see an American on the top of the podium at the next World

Championships, it would be fun to see Marianne do it again because she is so incredibly humble about her status of bike-racing-superhero. She may have a very good chance to do it since there are enough World Cups left for her to snag the necessary points to award her a second row callup at minimum at World Championships. As she talked about Worlds, she was clearly extra motivated to put on a good show since it is in her homeland of Holland.
As for me, I may not have had the race I hoped for but I didn’t let it ruin the rest of my day. It’s not too often I am in Frankfurt, or even Germany so after the race, Jonas and I headed over to 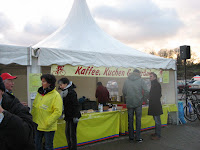 the race site café to enjoy our vices - German beer for Jonas and Glühwein (steamy spiced red wine) for me. I barely drink during race season so thoroughly enjoyed every sip. Our café was situated in front of a paved turn right before the staircase which proved to be more exciting than we would have thought possible; every two minutes an elite male racer slid out and smacked onto the pavement or into the course fencing. Many skinsuits were laid to rest that day.
After the race, instead of doing our usual picnic at some gorgeous European scenic spot along a river, we opted for a gas station mini mart stop to get a bunch of pretzels with mustard. For the next thirty minutes we stuffed ourselves like little kids with pretzels slathered in mustard until we had matching yellow clown faces. (It’s harder than you think to eat them in the dark while driving.)
Pics of me are taken by Ubi Blutsventje (Thanks Ubi!)
Posted by PEANUT at 8:28 PM

Christine, your so humble. You did really well! Way to go. Great photos from jonas. I can tell your muscle tone is more refined, though you may not think it is noticable. Though I don't drink alcohol, the hot spiced wine, beer, prezels and mustards sounds really good. Keep up the great work, and as always, I'm your biggest fan. Ordered my seat and I go riding tomorrow. Thanks again for keeping us up to date.
rickie

What picture is on the side of your motor home?

My photo has leaves in all the right spots.

Ok, Nemo is sporting her new saddle. Looks good, but I hope my rear doesn't tell me I spent a lot of money for a brick with pretty red leather on top. http://rickierainwater.blogspot.com/