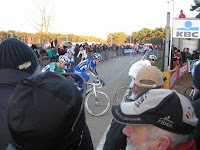 I just heard on the radio that, a month ago, Niels Albert talked without thinking...again.

Two months ago, he said that road racing is easy; all one has to do is pump their tires and they can finish the Tour de France. And more recently he just said that if he is not strong enough to win the World Championships due to his injury sustained in November at Asper-Gavere, then he will work for his trade teammate Vladomir Simunek (who, in my opinion, has no chance in hell to win.)

In reaction to his comment, Belgian National Coach Rudy De Bie said that if Niels doesnt look like he has the chance to win at Worlds, he will not be chosen to race for belgium at the event. Sven Nys also commented, first saying that he is the wrong person to ask about this since he himself was guilty doing the same as Niels by helping his former Rabobank teammate Richard Groenendaal win Worlds in 2000. Then Sven went on to say that they will need all Belgians to work together to beat their biggest threat named Lars Boom.

Tomorrow I will see them all again at my next race in Loenhout, Belgium. I expect the crowds to be thick again at this event since most people have the day off and it is centrally located near Antwerp. Wish me luck!
The photo is of Niels Albert following Sven Nys and trailed closely by Richard Groenendaal at Zolder World Cup last Friday. It was Niels' first race back after his injury.

Yes, in fact he is saying what most people believe to be the priorities.. first me, then the team, then the country.
in fact, I believe most riders would rather have the world jersey in their team instead of it going to a fellow countrymen in another team. The team is also the one who pays your bills.

I agree. it is just that most racers aren't as public about their designs to do this. AND most other racers are not as famous as Niels.
There is also a certain loyalty to one's own country - especially in Belgium - that has to be acknowledged. Niels slapped his fans in the face with his comment. I guess it could be worse. he could have said that he planned to work for a Nederlandse rider.