My interview was in GVA and Het Belang van Limburg yesterdqy 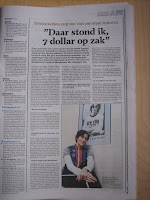 Lately the only interviews I've been involved in are the ones I write myself, so it was strange to actually be the interviewee this time. Luc Lamon was the interviewer. Since I was interviewed by a fellow journalist, I couldn't resist asking him questions about his job. What a great opportunity.

Luc is also one of the organizers of GVA (Gazet Van Antwerpen) Cyclocross Series, with particular emphasis on the infamous Koppenbergcross. On a side note, the scoop is that Belgian National Coach Rudy De Bie just gave his women racers permission to compete in Koppenbergcross next year (the day before European Championships). This means there may be a Koppenbergcross category again for women next year! Yippee! It is by far my favorite course in Belgium.

Last month, Koppenbergcross had a steady stream of 700,000 Flemish viewers on TV, with the highest volume reaching 827,000 towards the end. Maybe the two-man last lap battle between Sven Nys and Lars Boom pulled that extra 127,000 to a TV to witness the outcome. That is about one in six residents living in the Flemish section of Begium tuning into the race.
Posted by PEANUT at 1:06 PM

I'll go first in our push to 50 comments. Did you do the interview in Flemish, or was it translated later?

And Gewilli, show us your cans.

...wow...i must be spaced out...that interview seemed like it was in a whole different language...

Knap! That is so cool - I love the interview - sounds just like you!

Glad I could read the article here, as I didn't have the newspaper. I put it also on the OA site. :)

Wow, that is a great photo of you. I think it is time you get an entire folder on my computer as I have so many photos of you already. I still miss John. Great photo. I road the Fayetteville trails today and wow, totally great ride today. Here is the blog about it. And oh yeah, I guess I am going to have to learn Flemish if you are going to be showing up in the papers all the time. I know two langauges, English, and really bad English.
http://rickierainwater.blogspot.com/

Interesting interview. Even though belgium doesn't have a newspaper/magazine devoted to cyclocross, there are webzines and other sites concerning cyclocross galore. Its the same problem Sven Nys has to get elected Sportsman of the year. Regular cycling is even more popular over here, and thats usually where the prizes and the money go to. Lets hope Nys gets it this year. He stands a fair chance with Boonen and Devolder as runner ups