Training Camp with the Prunes of Agen

I attended training camp with a preconceived notion that i was going to be tortured on the bike for a minimum of six hours a day. AND i'd have to do it all on one dry piece of toast for breakfast (how was i supposed to know that petit dejeuner simply meant breakfast - i just saw the word petit!)

But i was pleasantly surprised. The first few days of riding were rather subdued and social. Our team manager Nicolas Coudrey even sent us out for play dates to "relaxation" seminars and girly-girl spas! It was great! The social time was great for working on my french - or lack of it! The teammates took turns teaching me new words. 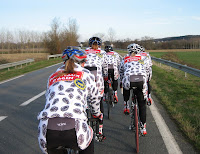 The most challenging event at training camp was when we were subjected to Nicolas' variation on the term "early morning wake up call." Not only did we have to get out of bed at 7am (normally i wake up at the crack of 9) but we had to be downstairs by 7:05 ready to run - at tempo, yes on foot! The first morning I was a bit unprepared due to my misinterpretation of the event. I thought we were going for a leisurely walk around campus to loosen up the muscles - wake the body up. I wore no less than seven layers of clothes including my warmest hat and gloves but no sports bra. Big mistake. I sweated through all layers. The 200 meter sprint at the end was almost unbearable. I don't know what was worse - no sports bra or sweltering in my multiple layers of wet clothing. In comparison, all other events were easy - I think this was his plan!

By the next morning, though, i was prepared not only with a sports bra and fewer items of clothing but with a game plan to turn the run into a more pleasurable experience. A

s soon as we started to run, I immediately went to the front of the group to set the pace (i learned this from Musseauw when he won the World Champs in Lugano - he went to the front to set the pace on the climb to discourage the climbing specialist with whom he was riding to attack). I then turned to the girl who ran alongside me and ordered her to run "piano". The plan worked. And any time someone tried to scoot up alongside me, i casually swerved in that direction leaving no room for her. HAHAHAHA. I did this every morning for the rest of training camp.

The riding in southern france was quite beautiful. It was like a cross between Napa, California and Belgium's Fleche Wallone World Cup course. Its rolling hills were covered in vineyards while the pavement was as crappy as Belgium's infamous race.

When the training pace was easy, the girls rotated in the double paceline so that each of them got their english lesson in for the day. In exchange, I was handed a few more french words to add to my rapidly growing vocabulary! They even started to jokingly communicate with each other in English. I’d hear exchanges like “hello, and how are you today? I am fine, and how are you? Where do you come from? I come from .” I have heard stories about the elitist french with their militant language pronunciation so i was very relieved and thrilled to have such supportive teammates who who all worked very hard to communicate in English and include me in conversations whenever possible.

But without my Finnish teammate Tiina, who took the time to translate for me, the camp would have been much more trying.

The meals were anything but petit! Breakfast consisted of french baguettes, various jams, butters, spreadable cheeses, cereals, yogurts, and fruits. Lunch and dinner consisted of more french bread, overcooked pasta or rice, overcooked vegetable (the overcooked thing seems to be very popular here in Europe), three types of meats or fish, cheese chunks, spreadable cheeses, pastry desserts, fruits, and yogurts. After a few of these meals, an image of Bob Roll popped into my head. In his book, he wrote about how he must have been the only guy to gain weight during the Tour de France since it was unlimited food at every meal - a pleasant sight to a starving, tight-budgeted bike racer! Since i wanted to avoid his fate, I started to curb my eating a bit. Thankfully my vegan diet helped keep me away from most of the calorie-intensive items! I almost wished french bread was made with lard! At least i now never want to see another piece of french bread for at least a year.

Since the brain has the talent to forget pain, I just remembered the second hardest part of training camp - the massages! I guess i have not been good about massaging my legs on a more regular basis, because I was tearing on that massage table. Instead of letting up on the pressure, he ordered me to breath deep and relax. I cannot imagine that childbirth would feel any more painful than those massages. Damn IT bands.

Training camp ended with a local bike race with the regional boys. The girls lined up in the front to intimidate the boys. Once the whistle blew, it took them about twelve seconds to 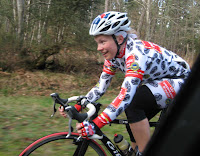 catch on to our tactics and swarm around us at mach (is this correct) speed. I knew that if I didn't suffer then, it would be worse later on. So i suffered, and suffered, and suffered, ending up in the chase group to finish somewhere top 20. My teammate Angelique rode a phenomenal race to win the sprint in our group - ahead of all these guys with monster quads!

Overall, I am thrilled to be on the team. My mates are fabulous and the management is competent and professional. I just wish they weren't so far away from belgium. Since most of our races are in southern france, switzerland, and spain, I expect i will do a lot of traveling since i opted to keep my apartment in Leuven.

Thanks for reading this especially long entry - assuming you got this far!

Nice climbing tactics. I never seem to be able to fool the climbers though. Fun uniforms too!

Nice posting, glad to hear you're so happy with your new team!

How do i go about getting me a jersey with pockets full of prunes? (I'm assuming they were present at all meals too? ;)

Thankfully, they only had prunes at team presentation since i overdosed on them that night! But what they did have every day was prune energy bars. They also had marzipan-style bars and these fruit smoothies in tube form - all yummy (and vegan.) Even our recovery drinks were vegan.