Here is what i would have written about Pruneaux D'Agen team presentation if i were able to log into my blog account from Southern France:

After two car rides, three trains and a taxi, I arrived at Team Presentation location in Agen, France. I was sure we drove up to the correct building because Nicolas Coudrey, Team Manager, and I were greeted by a 20-foot tall maniacally enthusiastic inflatable prune swaying in the wind.

Once inside, I found the rest of the team all kitted up for photos. After a two second meet-and-greet, I got my "christine" duffel filled with team stuff, and changed into my matching kit.

Armed with our skimpiest jerseys and bibs, we braved the cold weather for team photos. I swear this must be part of the training camp hazing process. Now that I’ve experienced this tradition on numerous occasions, I have a true appreciation for the smiles donned on the faces of racers in other team photos! I recently saw a photo of team lipton taken in in January. I just happen to know those women were braving serious snowstorm weather in their summer wear! 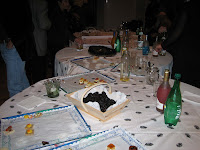 Immediately following the session, we were brought into a conference room with a large oval table. All the racers, support crew and management were present. One by one, we introduced ourselves to the group. When it came to my turn, I tried to be witty, intelligent, fun and thorough. As I looked around the room following my mini monologue, I was greeted with blank stares, half smiles, and inquisitive brows. It didn't take long for me to realize that only about 2 or 3 people in the room caught half of what i said. What?!? English is not as universal as they lead us to believe in good old USA, the presumed center of all existence?

Next we were whisked into a tiny room filled with tables and chairs. It was separated from the Team Presentation area by a somewhat troubled fan-syle panel curtain; the panels wouldn't lie in the same direction creating big gaps AND the two halves of the curtain did not reach each other.

Early in the presentation, we were individually called out of the room wearing our prune kit. After standing in front of the crowd for a few minutes, we were then ordered to return to the other side of the faulty curtain to change into our "casual wear." I wish it w 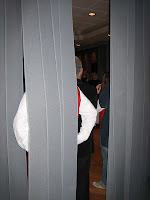 ould have been appropriate to take a photo of the gals trying to duck for cover behind the tables and chairs in hopes of a little privacy! I'm sure it kept the presentation attendees amused!

After presentation, I expected some people would be interested in talking to the one American on a French Team. But instead only three people talked to me all evening. It didn't take long for me to figure out two things: 1. that the rumors are true - they really do only speak French in France, and 2. my five words of french are not going to get me very far. The third person to speak to me didn't realize i spoke no french until about 20 minutes into the one-way conversation. It wasn't until she asked me a question and my response was a confused facial expression, that she figured it out. But within ten seconds she found out i spoke spanish so after 20 more minutes in spanish, she had to leave.

Once the party was over, we went for Chinese food. All the gals had the buffet but since I’m a vegan, the chef made a special meal – or three – for me. I had so much food, it was comical. Yes, I ate it all – as if you had to ask! Oddly enough, I somehow managed to break my tooth while eating soft Chinese mush. At some point, in between our a.m. and p.m. rides I now must make a trip to the dentist.

It was after 11pm when we finally arrived at our sleeping quarters. As we practically sleep-walked into the house, we were hit with a serious dilemma – the house had no sheets, blankets or HEAT! After Nicolas put in a few minutes of quality phone time to the owner of the house, we were off to emergency housing for the night. The head of the regional cycling federation put us up on a moment’s notice – it was warm and comfy!