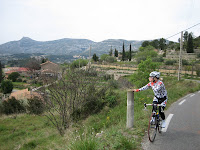 Yesterday was my first ride here in Provence. It was only 15 degrees and overcast but i didn't care. I was just so happy to be on the bike riding in an area that was completely different from anywhere i've experienced so far. As we weaved in and out of the mountainside, cutting through quaint little towns, I was on sensory overload trying to take in all the views. 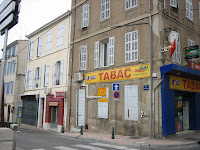 During our ride, we passed two other professional riders – Remy Pauriol from Credit Agricole and Philip Deignan () from Ag2r. I still can’t get over how bizarre it is to pass professional riders on a random training ride near “home.” Oh, and I'm staying with two pros as well - Tiina and her boyfriend Jussi Veikkanen of Francaise des Jeux (i read it off 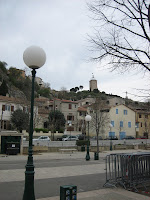 his trading card so i don't botch the name any more.) I haven't really seen much of him yet, though, because he's been a bit under the weather since his race on Sunday - Brabantse Pijl in Belgium. The race went well for him but left him a wreck!

When we were almost home, we stopped at at a cafe for an iced tea. There is nothing finer than stopping on a ride for a drink - well maybe stopping for a drink and a dessert!

After showering and re-bandaging my various body parts that I unwillingly put through a meat grinder a week ago at a race in Cholet, we sat down to huge bowls of pasta and Finnish rye bread – yum! We toppe 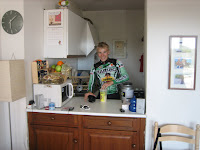 d off the meal with double expressos and headed out to La Ciotat (on the Mediterranean Sea 30km east of Marsaille) to visit Tiina’s Brother, Mika ( another top cyclist here in .

Their apartment was gorgeous - it overlooked the Mediterranean Sea. If i had an apartment like that i would MAYBE, just maybe consider moving to France...maybe. 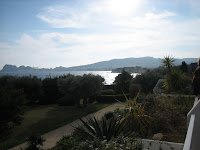 In the evening, we collected our laundry that was hanging on clothes lines in the alleyway in front of Tiina's apartment. I was so excited that the first time I ever put clothes on a clothes line was in Provence. It made me feel like a local - hahahaha. OK, well it at least made me feel like I was living with a local.

Today was an off day – no, I wasn’t feeling off but took the day off the bike. The beach was a possibility if it hadn’t have been for the sporadic torrential rainfall. Instead Tiina and I went to their version of a mall. I shopped for cute earrings and a top. Found both. As soon as I warm up from getting drenched in the rain, I will try on the shirt and post a photo. The earrings are a must-see as well.

As we drove home from the mall, we saw a few cyclists braving the rainstorm. I've heard that France is considered a fashion mecca but i have yet to see the cyclists partake in this rumor. Every single one of these cyclists were sporting the most bizaare outfits. The one that i enjoyed most was a head-to-toe live version of San Francisco in the 60's - full psychadelic tie-dyed kit.

Tomorrow I get to ride up and down the mountains. I'm so excited that i'm off to bed now so i can ride sooner!!

In the second pic, are those like PLUMBING on the OUTSIDE of the building??!!

Looks to me like a couple of vent stacks!

Hey, Do you come back in Belgium once day ?
I hope to see you again in competition, and why not to go to pick you up like last year ....
Enjoy your "holidays" ....

Yes, it very well could be plumbing. I don't think the French are nearly as handy as the Belgians. Maybe i'm biased, but i don't think so.
yes, adeline. I will return to belgium after ladies berry classic - the 16th of April? Maybe i will do a local race the following weekend since i don't have to return to switzerland/france until 26 april. And you?