Moving on to Marseille

Yesterday was my first ride in the Marseille area. All rides from Sandrine’s house start off with a 15km descent. It’s a great warmup but not so enjoyable on the way back - especially after a hard day of riding! Following the descent, we rode through undulating terrain spattered with little houses, vineyards and farmlands until we came to a tiny town with about eight stores, none of which were a café. That surprised me because I thought the French were big on quality of life and would therefore make every effort to accommodate their lifestyle. But no, no café. I bet there was one but I didn’t see it. Maybe it was around the corner. In Belgium, it’s easier to spot them because the second the weather promises to be somewhat sunny or even over 10 degrees C, the chairs are sprawled the balcony. And if a Belgian town had only one store, chances are high that it would be a café.

After departing the town we continued on to a mini mountain range. We rode up to the top and took the ridge across. From there we saw Mont Vontoux, the Alps, and some other famous places, names of which I don’t recall. As Sandrine pointed out the landmarks, I stood there with a gaping jaw and camera in hand – total tourist! I bet if Sandrine was on a ride with me in The Bay Area, I’d most likely be pointing out Mt. Tamalpais, Mt. Diablo, San Francisco Bay, and Golden Gate Bridge and the roles would be reversed and she’d be the one looking goof 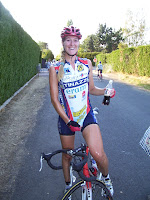 We passed only a few cyclists, many of whom were over 50 yrs old. We even passed a woman. I think it was the third our forth woman I saw riding solo in Europe. Usually it’s just like in the USA where every time you see a woman on a bike she is in tow behind a he-man of sorts. And too often she is on a mountain bike while he’s sporting a road race bike. I never understood that one.

Today’s ride was perfunctory – nothing untoward yet nothing spectacular to write about. Oh, I did take the camera out once when we stopped to have a brief chat with the DS (director sportif) of Tiina’s brother’s Team – Haribo (yes, the gummi-style candy company.)

Living with Sandrine has been quite enjoyable. She’s a fabulous gal with a large personality which is always entertaining. And I love her creative communication style. She mostly tries to talk in English. But every once in a while she will get frustrated with getting a point across and switch entirely to French, pausing every few words until she gets a “oui” or a “cava” from me. As long as I get the sentiment, I’ll give her the nod. Details are overrated and add confusion anyway!

Her boyfriend Olivier speaks VERY LITTLE English. Surprisingly it hasn’t stopped us from continuous gabbing. On a side note, I will soon post a photo of him because I need your help. He looks just like a comedian actor but I can’t remember the name. It will not be until Monday at earliest that I post the photo, though, because I will not have internet again until then. 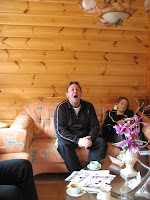 At the moment, I am borrowing the internet at Sandrine’s parents house 10km outside of Avignon. Her parents own a vineyard and keep an enormous vegetable garden. The grapes are for selling – their livelihood – but the veggies are for eating. For lunch we had potatoes and cauliflour, salad and of course the obligatory French baguette. We washed it all down with wine made with their grapes.

In a few minutes we’re off to retrieve the team bikes. I’m curious to see how the prune pattern looks on the bike. Afterwards, we may stick around town so I can do the touristy thing. Too bad my friend Johan from Belgium isn’t here with us. I bet he’d be filled with lots of fun facts about the city. He’s been a great source of history for me over the years.

It may sound corny, but each day I am thankful for riding a bike because it definitely has been a great way to travel and discover new places. And it’s a bit more flexible that joining the military I suppose.

Two photos above are of Sandrine and the bottom is of teammate Aurore's father after he was subjected to one of my picantes (aka pili-pili or chili pepper.) It has become a tradition of sorts to torture unsuspecting victims while they innocently enjoy their meal. Celine was the last casualty when she found a picante in her cake the hard way - or rather the hot way.
Posted by PEANUT at 3:26 PM

Check out Avignon if you can as it is tres cool! Philip

have ya ever made coffee the Litka way? In the french press you put a few chili flakes...

the first time i made it i over did it...

like sucking on a habanero while drinking hot coffee...

not for the normal New Englanders...

Sandrine es HAUTE! If she ever wants to ditch Oliver and wants to be American citizen, I'd marry her!

Ditto that. She is hot!

I'd submit that to Pez... she's hotter than most of the girls they post!

What is it about CTodd's magnetic attraction to girls...

merci christine !!!!!
I think you're a lucky girl because you visited the best part of France : The south of course !!!! I hope you'll take good remembers of your travel with us !!!
Kiss !!!!

hey sandrine:
YES, the south of france was the BEST!!! And you were the best host while i was there. Maybe if I wasn't too much trouble, i can visit you again for a short time.