My hour in Avignon 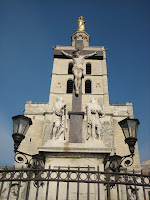 A few weeks ago, Sandrine and I had the pleasure of being tourists in the infamous town of Avignon, France. It was a convenient visit because we needed to pass time while waiting to rendezvous with our team support crew in a neighboring town to collect our team bikes.

It was amazing to walk around a town with so much history - and a rather turbulent one at that! Since i've had an a 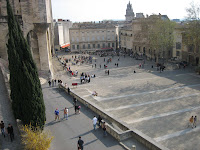 merican education, I relied instead on an internet site to supply you with a summary of Avignon (see below.) I pulled this info from Sacred Destinations travel guide. All photos but the top one were taken by me, though. 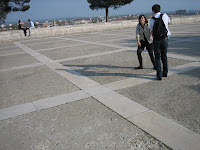 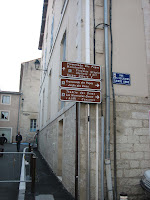 The Pont St-Benezet on the Rhône River, Avignon.

The site of Avignon was settled early; the rocky outcrop (le Rocher les Doms) at the north end of town overlooking the Rhône may have been the site of a Celtic oppidum or hill fort. During the Roman Empire the city was a major center of Gallia Narbonensis, but very little from this period remains (there are a few fragments of the forum near Rue Molière).

Avignon was badly damaged by the barbarian invasions of the 5th century and was destroyed in 737 by the Franks under Charles Martel, after it had sided with the Arabs against him. Avignon passed successively to the kingdom of the Burgundians and the Kingdom of Arles. At 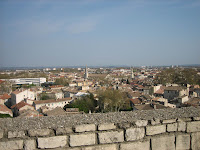 the end of the 12th century, its commune declared itself an independent republic, but independence was crushed in 1226 when Avignon was taken and dismantled by forces of Louis VIII and its fortification demolished as punishment for its support of the Cathars. Avignon was given to the counts of Provence and then the counts of Toulouse.

The town had significant religious status from ancient times. It was the seat of a bishop as early as the year 70 AD, and became an archbishopric in 1476. Several synods of minor importance were held there, and its university, founded by Pope Boniface VIII 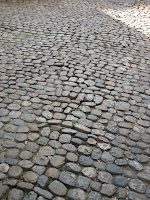 in 1303 and famed as a seat of legal studies, flourished until the French Revolution.

In 1309 the city was chosen by Pope Clement V as his residence, and from that time till 1377 was the seat of the Papacy, in the "Babylonian Captivity." In 1348 the city was sold by its owner, Joanna, countess of Provence, to Pope Clement VI and, though it was later the seat of more than one antipope Avignon belonged to the Papacy until the French Revolution.

Avignon became the residence of the Pope in 1309, at which time the town and the surrounding Comtat Venaissin was under the rule of the kings of Sicily (the house of Anjou). In 1348 Pope Clement VI bought it from Queen Joanna I of Sicily for 80,000 gold gulden, and it remained a papal possession until 1791, when, during the disorder of the French Revolution, it was incorporated into France. 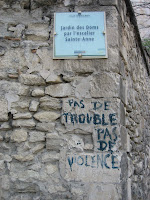 The period of Avignon popes from 1309 to 1377 was also called the Babylonian Captivity of the Church, in reference to the Israelites' enslavement in biblical times. The analogy fitted Avignon in another sense - the venality of the papal court caused th 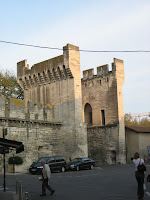 e city to become infamously corrupt, on the levels of Babylon herself. The poet Petrarch condemned the city's corruption, contributing to the papacy's return to Rome out of sheer embarrassment as much as anything else.

The return to Rome prompted the Great Schism, during which the antipopes Clement VII and Benedict XIII continued to reside at Avignon. The former lived there during his entire pontificate (1378-1394), the latter until 1408, when he fled to Aragon.

The walls built by the popes in the years immediately succeeding the acquisition of Avignon as papal territory are well preserved. They were not, however, 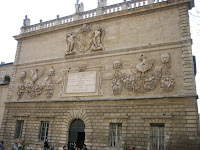 particularly strong fortifications; the Popes relied instead on the immensely strong fortifications of their palace, known as the Palais des Papes (Palace of Popes). This lofty Gothic building, with walls 17-18 feet thick, was built 1335-1364 on a natural spur of rock, rendering it all but impregnable to attack. After being expropriated following the French Revolution, it was used as a barracks for many years. It is now restored and open to visitors as a museum.

After the departure of the popes, Avignon continued to be ruled by legates as papal territory. Its existence was, however, somewhat precarious, as the French crown maintained a large standing garrison at Villeneuve-les-Avignon just across the river. In 1663 and 1688 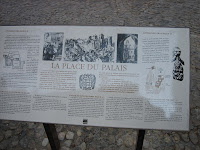 the French King Louis XIV occupied the surrounding Comtat Venaissin. The papacy finally lost the town and the Comtat in 1791, when it was incorporated into France after the French Revolution.

The only photo above which is not self-explanatory, is the one of a guy and a girl. They were making a shadow of a heart using their arms. But by the time I got 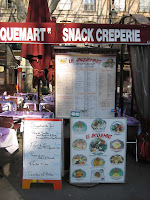 the camera out and hit the button, the moment was gone. Too bad i will never see those kids again to watch their relationship flourish as magically as the heart they expertly created. (is that a bit more optimistic?)

Wow, I was getting all misty reminicsing about the time my wife and I strolled Avignon on a balmy summer eve and then that last line about failed relationships! Kind of like being woken out of a deep sleep by a loud phone! Sounds like you need to meet a nice man? Maybe overtraining? Ciao Philip

good pictures and info, thanks. rad worlds photo on the left side there. relationships make you slow! cross season, where are you!!!!!!!

And my last line in the blog was meant to be realistic only, not pessimistic or fatalistic.

Thanks jeff! But considering many people think i'm a nutter, the second ending is more in line for me.