Two sure ways to get me excited...

Warm sunny weather and a fabulous bike ride. Yesterday I experienced both simultaneously! For the past couple of weeks, most of Western Europe has had extraordinary weather. In Leuven (BEL), it's been holding at a steady 27 degrees (about 81F.)

When it's warm and sunny, I'm definitely more inspired to leave the 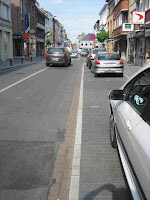 house. Almost always I will hit the top end of my training allowance for that day. Yesterday I was allotted 3-3 1/2 hours by my coach. My total ride time was 3:29:57. Another perk of sunny days is that suntan is finally coming along; the style of gloves i wear is now apparent based on the odd dark circle on the upper section of my hands.

When it is warm and sunny, I allow myself to get "lost" in Belgium. It is quite a difficult feat to accomplish since Belgium is made of small villages all containing a multitude of signs pointing you to the neighboring villages as well as to the larger surrounding towns. Even so, I tried my best and ended up in the French-speaking section in a town called Wavre. Any time us Flemish-based riders want hills, we head south to the French section where the roads are more vertical. 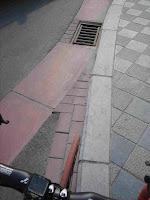 I frequent, but had a few noticeable differences. The obvious was that everything was in French and the people only spoke French. The other difference, probably only evident to cyclists was the abbreviated version of a bike path network. Many areas were completely devoid of them, while others included the paths almost as an afterthought or as a way to just barely appease the goverment who enforced the inclusion of paths on certain roads.

In many places, the paths were too narrow to fit a bike. And if i were able to ride in a perfectly straight line to fit, my right pedal would not have enough room to clear the curb. The paths circling the roundabouts were a little wider, but you must take them at low speeds in order to nail the narrow path once you've 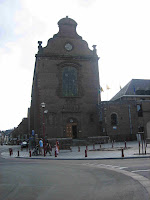 exited. I'd like to think that they were not intended for cyclists but they were all in the same slate red hue as the bike paths throughout the rest of Belgium.

While riding through town at low speed, I was able to window shop from the comforts of my own saddle. The town had everything - organic food stores, lively cafes, bookstores and a bunch of clothing shops that all seem to carry the style of shirt i've been looking for - lightweight, tailored style with abbreviated sleeves and a flowy bottom. It would have been fun to try the clothing on, but i was in the middle of my ride. Also, most shop owners don't appreciate their clothes donned by customers sporting a prominent layer of street grime on their bodies, firmly glued in place using a m 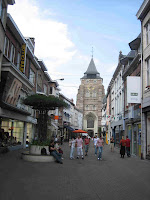 ixture of sunscreen and sweat.

By the way, my next race is this Sunday at a UCI (international) race called Roeselare. It is located in West Flanders, Belgium. I'm sooo excited!!! I've been wanting to race this event ever since i heard of its inception back in the winter.

My friend Serge and his family live near the course, so I hope they can come. But since Serge and his Brother Christophe work for Mavic driving the neutral support vehicles at the races, they are not always free. It's apparently going to be such a huge race that even the "concierge" of my building is coming to watch! When he told me of his plans, he confirmed that i will indeed be wearing the pruim bodysuit. Yes i will - head to toe! Can't miss me. He agreed.
Posted by PEANUT at 10:55 AM

Did you know that this was evidently Museeuw’s shopping technique, too, when he was training? Or maybe he just pretended to be glancing at shoes and pull-overs while actually checking out his rug-rethink in the mullioned panes. Good luck in Roeselare, home of Odiel Defraeye, is it not?
-- E.C. Chamberlain