Last Friday, I took a 10 hour train ride to Martigny (a bit east of Geneva) to meet up with the Prunes

for a race in Fully, Switzerland. I've only been to Switzerland three times previously - and two of them were just driving through on my way to somewhere else. But every time I'm there, I am just amazed by how beautiful the land can be. It looks so fantastically gorgeous that i swear it's fake and i must be dreaming. There are very few places I've visited that come even close. Of course Marin County (San Francisco Bay Area) is one of them (sorry belgium - but still love your beer and chocolate! In fact i'm eating some right now, no beer though. I'm still recovering from my last one(s)!)

Since I arrived just as the sun was setting, I 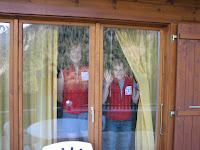 didn't get to see much as we ascended the mountain to the chalet 1200 meters up! But the morning views more than made up for it. I got to enjoy fresh bread and jam with super rich Italian roast espresso while looking out at the snow-capped mountains.

Our accommodations on this trip kicked the b 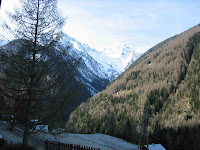 utt of those of last week. Last week we stayed in an apartment that was more like a damp tent with no heat. And this week we lived the high life! It was so warm at night that i sweated through two sets of clothes through the course of the night. Good thing Tiina, my sleep-mate, stayed on her side of the bed. She would have been a little shocked to find my side drenched! I found out later that the chalet belongs to our team manager, Nicolas Coudrey. He and his family bought it five years ago. What a GREAT find!!! It was really sad to leave. 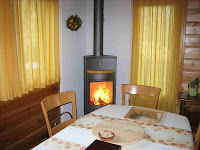 Mealtimes were just as fabulous as the views!! Nicolas' mom cooked us the most extravagant meals from homemade soups to colorful salads and pastas. She even had veggie burgers for me.

After breakfast our first day, we headed out to ride the course. Riding down the mount 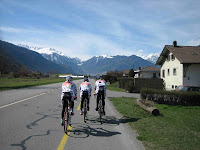 Once down, we rode the course trying hard to concentrate on the twists, turns, climbs, wind direction. But the awesome views competed for our attention and sometimes even won! It's funny how I didn't notice a single mountain or even a single tree during the actual race. I did see a lot of pavement, cars, and asses though. 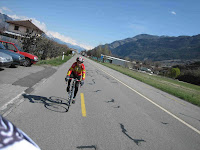 My race was pretty much shot before i even made it to the start line. I was hoping against hope -as the expression goes - that the extensive injuries i sustained from last week's crash would not affect my racing. Hope against hope. My race was spent yo-yo'ing off the lead group until the last lap where i finished in a group of about 12 gals who were chasing down another 14 gals who were chasing the three who got away. My teammate Christel finished in the 14-gal group for 10th place. Great result! 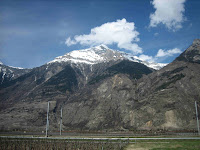 The only exciting part of the race for me was watching Tiina ride away solo from our group 2km from the finish. We were all riding in a "two-row" paceline until a gal attacked. Even though she didn't go anywhere, she disrupted the paceline causing the gals to momentarily abandon the rotation, opting instead to ride single file. Tiina placed herself in the front of the line with the gal who just attacked on her wheel. I was in third position.

As Tiina slightly lifted her pace to test out the field, she gapped the girl behind. Immediately I moved a little to one side of the gapped gal so that the strung out field behind couldn't see what was happening in front. As we came close to the next turn, i yelled at Tiina to GO! She 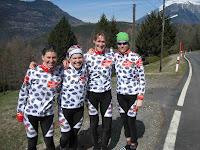 immediately jumped the field into the headwind that was shortly followed by a right-hand turn, that rewarded her with a much needed tailwind so she can stay away until the finish. A couple of girls tried to follow her, but by the time they passed me and the other girl, Tiina was already too far ahead.

I was particularly thrilled to see Tiina make something out of her race after watching her come back from the break that eventually succeeded to the finish. Due to an injury, she was split from the break on a key climb because she couldn't apply full power. 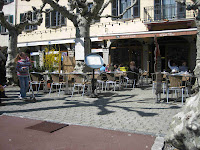 Sometimes the small triumphs are what can keep us going when everything else is seemingly not in our favor!

After the race, we drove back to Tiina's house in Provence - which is where i am now. I have been taking a bunch of photos here - some on our 2-hour ride today and others from random places like her brother's apartment that overlooks the Mediterranean Sea. Those photos - and more - will be up on the blog shortly.

Thanks for reading!! Wish you were here!!
Posted by PEANUT at 11:45 PM

I wish I was there too as I watch it rain at 45 degrees here in Vermont. It make me wish it was july and tour time when I go to the pyrenees and climb,climb,climb! I love the prune kit especially the shoe covers! Get your team bike yet? Bon chance Philip

Merci Philip:
We get our team bikes Friday. We are meeting in Marseille for the bike fitting and collection!! Funny thing...I just got an email from our bicycle manufacturer today asking us for our blood type. Apparently we are going to get blood-type stickers on our bikes. Sounds a bit morbid, but if it saves one of our asses... I will SURELY take a photo of this sticker and post it on the blog. ha. or i guess not so ha.

AND have a great time in the Pyrenees!! I'd LOVE to ride there some time. Do tell me how your trip was. And regarding the shoe covers, we actually got two versions - the heavy winter windtex ones and the "race" booties. As you can tell I get a kick out of them too. I think my favorite of the prunewear is the bandana. When i first saw it i thought it was a handkerchief but then noticed my teammates wearing it on their heads.

oh my gosh! what a wonderful way to spend spring!

it sounds so neat there. i love reading about your adventures.

beautiful and fun! what a good life...

Note the sewer grate in the fifth picture.

BTW, the team pic is like the FUNKIEST! At first, it all looked like one great big gaudy leopard print. Then, looking close, it's ALL prunes! ROFLMAO!!! Right out of Liberace's walk-in closet.