Yeah, training in Marin County totally bites. OK, clearly based on these photos that was a joke. 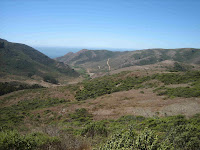 In preparation of cross season, I've been spending a lot of time in the Marin Headlands - just over the Golden Gate Bridge from San Francisco.

Although I miss Belgium more than I would have thought possible, it feels really good to get back to my usual training routine here 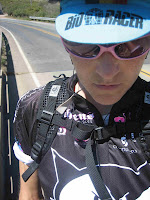 in California. I took the photos so I can take you on a virtual cyclo-cross ride with me. 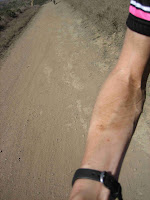 The first photo is of me trying to get my heart rate monitor to confirm that I was truly alive.

The next is of my dirty arm after a few bike shoulderings. For the next few months, I'll have not only a perpetually dirty forearm but it will be spotted with black-and-blues from tossing the top tube onto the forearm a little too aggressively. 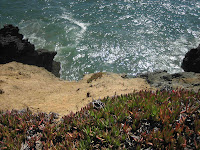 The next three photos were taken from the top of a cliff overlooking Cronkhite Beach. My friends and I like to go to this spot to watch the beginner surfers tackle the tiny waves of the Pacific Ocean that rarely ever reach two meters high. Even so, it's still fun to watch them bob up and down in the water for thirty 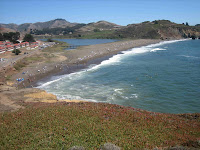 minutes straight without ever attempting a single wave. And on the offchance that they do go for a wave, we get super excited when they stand on the board for over three seconds.

The photo of the rock is my favorite. Every time I pass this rock, I see a handful of tourists taking photos of it. If only they knew that us locals call it the 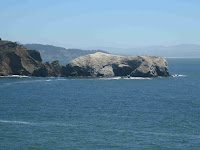 doody rock - it's white from seagulls using it as a toilet.

The one of the mini-lake is just before Cronkhite Beach.

For fun, I included a photo of my dancing rock which is located at the top of a hill where old springs and 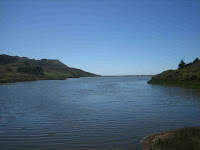 miwok converge. Although the spot is in full view of the trails, the passerbys would have to actually look up to see me shaking my booty!! 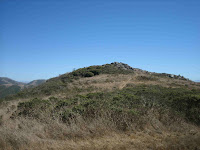 On another note, Don just got his hot tub fixed. Too bad the heat wave is still going on.

Oh, and I met with Dave of Vanderkitten a few nights ago. It was great to meet him for the first time. But even more importantly, I was thrilled to score a bunch of really cute clothing!!! Photos to come of dave and the new outfits.

...all the years (40)& all the miles, both road & dirt (untold 'n' uncountable), this canadian boy still loves ta see pictures of beautiful 'marin', my adopted home...
...just awesome, to see it & ride it, wow, indescribable...

Hi Christine, superbe photos of "Marin county". Congratulations and thanks. Yes! easy to miss Belgium, I understand (like today the weather is amazing...rain and rain. Good training overthere and great first races. I follow you(if I can). All the best from Belgium but Wallonie. Philippe

I'm working on the haircut shot. Unfortunately i've been training so hard that I have not even had time to wash my hair to make it look halfway decent. OK, well maybe i washed it a few times but then the helmet goes immediately on top leaving me with perpetual helmet head.
Hey Philippe: I will no longer discriminate against folks from wallonie! haha.
Glad the marin photos were appreciated!

It's a little place on the Pacific Ocean. You know what the Mexicans say about the Pacific? They say it has no memory. That's where I want to live the rest of my life. A warm place with no memory. Open up a little hotel right on the beach. Buy some worthless old boat and fix it up new. Take my guests out charter fishing...You know, in a place like that, I could use a man that knows how to get things.~
Andy Dufresne ~ Quote from the movie Shawshank Redemption