As I'm sitting at the cafe in Leuven... 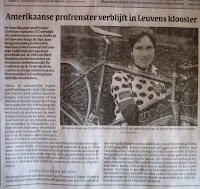 with Gary and Betty of Sacramento who just arrived this morning, we open the Het Laatste Nieuws to the World Championships coverage and who do we see staring back at us? ME! Yippee!

A few days ago, Het Laatste Nieuws set up an interview and photo shoot with me. When i called the interviewer yesterday to see when it would hit the papers, he was in Niels Alberts' home interviewing him! I'm just so honored that the same guy who interviews stars like Niels would take the time to visit with me for a story!

Gary and Betty are cross racers whom i've known for years. Betty 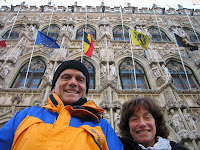 races for Velo Bella and wins just about every race she enters while Gary holds his own in the peloton! The photo is taken in front of Leuven's Tourist Center across from the famous Cathedral in Grote Maarkt. These two buildings were almost the only two left standing after the whole town was leveled during WWI. Many view it as a miracle. Ik ook.
Posted by PEANUT at 2:34 PM

tell Betty we all think she's a STUD!

she banged herself up pretty good at a local race here a few weeks back.

can't believe how tough that girl is.