Last Saturday, Serge and I drove five hours to Nommay, France for a World Cup. 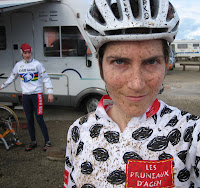 It may as well have been a hockey event based on the level of senseless violence !

I got a slow start in the race. Within twenty seconds, I smacked into the back of a stopped rider whose handlebars got caught in the mesh fence lining the super steep runup. As we stood there, we were mowed down by the pack of gals. (OK, not exactly violence but the day gets worse!) By the time I made it to the top of the runup, I was in third to last place.

I was now on a quest to get back into the race. After a considerable amount of mud collected on the bike, I pulled into the pit for a clean change. What I also got was a bike thrown in front of me by the Spanish rider. As her pit guy grabbed the bike, he swung it up in the air and it came about one centimeter from beheading me. If i hadn't screamed, I would have been knocked out! Serge was so unnerved that they got into a yelling bout. Luckily no fight came of it.

Not even a minute later, as i was approaching the same spanish rider and a german rider, I watched the spanish rider yell wildly at the german rider while simultaneously removing her hand from the handlebar to physically shove the german, sending her flying. I think this was one of the most disgusting events i've ever seen at a bike race. I was completely shocked that a cyclist could have such little respect for her fellow competitor to lay a hand on her. What makes it even more odd is that the section of course we were riding was VERY WIDE so the german was clearly not in the Spanish rider's way.

My final placing was a mere 20th. I wish the race were just one lap longer! (But as you can see above, I finished in front of Marianne Vos, albeit post-race!) 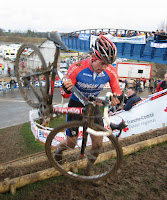 Once the race was over, I figured the violence was too. But no. At the finish line, we waited for security to open the gate to let us out of the course so we could get some warm clothes on. After our support crew waited over five minutes on the other side of the metal gate with warm clothes in hand, some of them got impatient and tried to rush the gate. The security guards obviously fought back. Not a pretty sight.

I also heard that Jonathan Page's pregnant wife, Cori, and child were pushed hard just before the start of the mens race during the entrance gate debacle - right in front of Jonathan! It happened while she was on her way to the start line with Jonathan's spare wheels. Cori was left with nasty head bruises and swollen knee while their little one is OK. What a way to start a race. 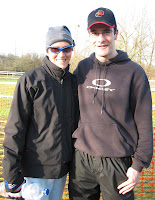 The highlight of the day was watching the guys event while simultaneously making good on the date that Franz, Suzie Godart's son, set up for me out of revenge. Franz was so thoroughly embarrassed when i arranged a date for him with Marianne Vos through her brother, Anton, that he set me up on a date with Anton to get me back. Well, we had a good time (see right). Neener, neener Franz!!! Your turn!!!
Posted by PEANUT at 10:32 PM

i guess you're gonna have to start taking some boxing classes as off-season training, then?


keep at it Peanut!

okay...too much info about the race and not enough about the date!

i saw the results before i read this...

thanks for not making me pester you about what happened...

although... damn that's pretty sketchy... esp about that spanish chick - reminds me of that internet vid circulating with the dude throwing the guy over the bridge after pulling a move like that...

glad to hear ya survived...

and yeah? how'd the date go? YA got some real flesh and blood to replace Boonen yet?