You missed a GREAT weekend! 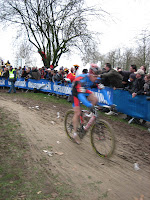 ides.
I obviously didn't see Katie's race but i did hear her over the loudspeaker for fourty minutes straight. I was thrilled to know all the props i gave her every time the euros would ask about her were backed up with serious results!

Watching Jonathan school those belgians was a real treat! Midway through the race, he came flying past me and for a moment i was confused. My thoughts immediately were one of distress. Since he was all alone and riding along seemingly without effort, I thought maybe he crashed or had a mechanical. But a few seconds later, when i saw Franzoi i realized JP was riding in FIRST PLACE!!!!! (eerste plaats for all you dutch speakers - hahaha.) 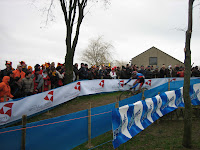 Soon enough, Page again came through in the lead but with Vervecken in tow.
After a brief argument with a group of belgians who were standing next to me regarding who should win the race - vervecken or page - i won the argument by telling them that i'll just cheer for some Netherlanders instead. They then admitted that JP is one of their own and if a Vervecken doesn't win, they'd want Page to take the glory.

After the race, I found out why Page looked like he was casually 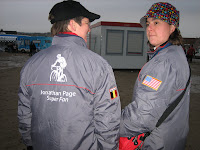 riding along while in first place - he didn't know he was AT THE HEAD of the race! On one of the laps, he came by the pits and asked his super-support guy Frankie what place he was in. I wonder what he was thinking when Frankie shouted the news.

The photos are of JP in the lead (note that in the top photo you can see the crowd yelling for Vervecken just behind Page on the final lap just exiting the long sand pit), JP's family who head the JP Fan Club 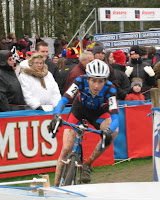 (check out the US and Belgian Flags!), me having a tough day, and Superstar Marianne Vos and me just after we traded jerseys. This is clearly proof that i am indeed twice her age AND her size! She is surely one of my favorite riders in the womens' peloton.

I wish i also had a photo of Rhonda Mazza, one of our USA gals who rode an incredible race for 11th place. And Keri Bernholt was just behind in 15th. Dierdre put in a great showing as well! No need to put up a photo of Katie after her 2nd place finish since her photo is all over the internet press/media world by now. I'm quite honored to be their teammates! 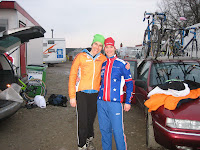 Thanks for reading,
Christine
ps THANKS for all your well wishes. I wish my results would have reflected all the good vibes I've received!
ps more updates from Worlds to come
Posted by PEANUT at 12:07 AM

"i won the argument by telling them that i'll just cheer for some Netherlanders instead."

that course looked incredibly difficult. way to stick it out. it's those days when the legs aren't great and we still keep turning them over that offer good glimpses into the heart of a professional.

can't wait to read more about the World's shenanigans. toss one back for us home-bound hooligans!

thanks for the cool race reports. it's neat reading things from your perspective.

Well done Christine. I applaud your professional reporting (writing) and your unrelenting strength of character! Yeah!!!!


Will come to cheer you up at Lille

Congratulations, Christine! US Cyclists were fabulous this weekend!
It's also great to read some race comments from te riders themselves.

i sure didn't i was there! sorry i didn't get to talk...i did cheer though!

Way to hang in there girl. We appreciate your hard work.You are no doubt one tough cookie....

You were part of the best US cyclocross squad ever. Talk about big time.

Nice piccie with Ms. Vos. I think it may be the best I've seen of you. Great smile.

ALl the best from the other side of East Providence