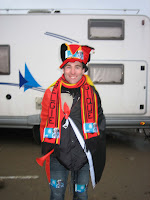 Yesterday i took a break from my life to play tour guide. Keri Barnholt, USA Teammate, and her friends visited my quaint town of Leuven for a little sightseeing. It was great for me since i've never really had the time to check out the town myself!

I will post the full story with photos soon!

But in the interim, here are more photos i took at World Champs.

The top photo is of what I'd consider a super-supporter! He is covere 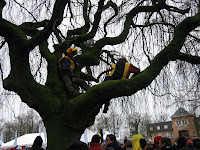 d in Klaas Vantornout of Fidea trading cards AND handing them out! He was overjoyed to pose for me.

I took the one of the fans in the tree because I really loved how the tree looked with brightly colored spectators attached.

The next photo is of another random fan. He was just so animated, even without his funny costume! 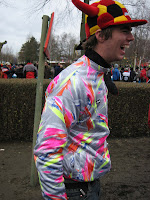 The third is of Hilde Quintens (left) and her partner. Hilde and I have gotten to know each other over road and cyclo-cross seasons. She is one of the more grounded gals out there. But more importantly, we always make each other laugh!

Finally, a photo of the two biggest celebrities on the Belgian TV show, Allez Allez Zimbabwe! He met her while bike racing here in Belgium and they just got engaged on the last episode. Since his race results have been suffering a bit recently, his team manager tried to pin it on his relationship, telling him that it's made him not as competitive. The two of them are just so likeable that you want them to succeed. You cheer for 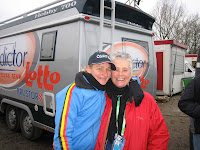 their relationship while you cheer for him to finish higher up in the events. I think they were both surprised when i told them that people in USA know who they are. 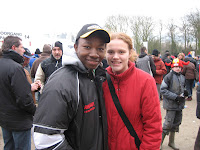 tories on World Champs to come!
Posted by PEANUT at 9:37 PM

I put something on your website, now I know what a blog is. It's very nice.
Jan