It felt good to race with short fingered cycling gloves for a change! 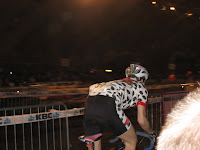 Usually for races here i have been using the windproof, water-resistant, insulated Specialized gloves that are also reflective so all the other racers can see me. But it was awfully weird to sweat during a warmup. It was about 65 degrees (still haven't found the degree symbol on my keyboard) inside, so just easy pedaling on the trainer was enough to drench my bra, undershirt, shorts and even my hat.

The races started out LE MANS style (thanks!!) - running for about 30 meters to the bikes. After riding a short wood panel platform covered in sawdust, we entered the first 360 degree turn of many. It was completely covered in mud - thick mud grooves and all. 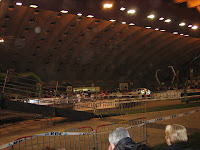 Then you hit a super short steep bump. The mud was so grooved and thick that it took a lot of upper body strength to shove the bike up the hill while remaining upright. We continued on the mud through the next 360 degree turn covered in thick grooved mud, down the semi-fast straightaway past the pit (or as they say here Material Post), into another 360 degree turn, over yet another short steep bump. The second we clear the bump, we had to collect enough speed to hit the flyover ramp. BUT leading up to the ramp was more thick grooved mud so you have to hit it just right or else you're walking. Down the ramp, back into the mud but in the next 360 degree turn was turf - or rather plastic grass with loose dirt on top. Fun. 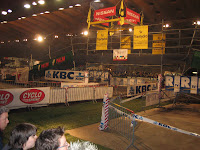 Back around to another 360 and immediately into yet another u-turn but a banked one - all covered in dirt/mud. Once clearing the banked turn, we had to sprint again to hit the rollers - think bmx course. After making a large u-turn, we headed down a mini wood panel/sawdust straightaway and into the long narrow but deep sand pit. (I only got about 3/4 through it before having to get off - ugh. All the guys rode it.) The pit spits you out onto a circular u-turn covered with that plastic grass that stops at the start/finish wood panel straightaway. There you have it - all 1km of it.

Considering what they had to work with, they really made it challenging yet fun. It felt like a real cross race, but a little shorter and with a few more hairpin turns, though. The cleanup must be a bitch, though.

Groetjes,
Peanut
Posted by PEANUT at 10:38 AM

Hi. Great to read these posts. But I have a question...a 360 degree turn? I can't envision it, because it means turning around completely and heading off in the direction you were headed in before you turned. Do you 180 degrees? As in a hairpin?

Keep up the good work. Always a pleasure to read.

Oh...math was not where I excelled. Thanks.

but on a lappy... better off doing the cut and past

re the degree symbol...