Back when Americans had a good reputation... 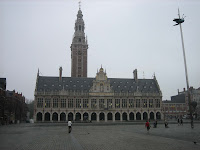 A couple of weeks ago, I took Kerry Barnholt (US National Team) and her friends on a tour of my Little (but spectacular) town of Leuven. This was one of the sites on the tour:

The University Library in Leuven

As libraries go, the university library in Leuven has had an unusually turbulent history. Its beginnings, however, were normal enough. Established in 1636, it found its first home in the main University Hall on the Naamsestraat. Less than a century later, about 1725, it moved to its own separate wing of the University Hall building, where it had a magnificent late baroque reading-room facing the Old Market Square (Oude Markt).

In August of 1914 German troops set fire to the library building and to much of the city of Leuven. The destruction of the library aroused international indignation. Before the First World War had even ended, committees were formed in both Allied and neutral countries to collect money and books for the reconstruction of Leuven’s university library. The Americans took charge of building a new home for the library. As for Germany, it was required by Article 247 of the Treaty of Versailles to donate thirteen million marks’ worth of books in reparation. Books came pouring in in such numbers that by 1939 there were some 900,000 volumes on the shelves of the reconstructed library.

A new site was chosen for the library - the square called Mgr. Ladeuzeplein, and here the new building arose from 1921 to 1928. It was designed by the American architect Whitney Warren (1864-1943) in the style known as Flemish neo-renaissance. The library is still the most impressive university structure in Leuven.

From the outset the building was conceived as a monument, and has been classified as such since 1987. Its interior is also on the classified list. Its style is historicising and its decorative scheme is rich in iconography. Its recurrent decorative themes include: Belgian patriotism (busts of Cardinal Mercier, King Albert and Queen Elisabeth; wall-irons in the form of their monograms), the Allied victory (heraldic flora and fauna including the Japanese dragon and the English unicorn on the lateral facades; Our Lady of Victory, the famous helmeted Madonna who is piercing the head of the Prussian eagle with her sword) and American friendship (136 engraved sto 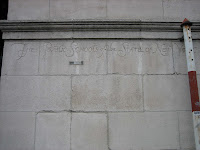 nes, the American eagle, 48 bells (increased to 63 in 1983) in the belfry for the 48 states and 48 gilded stars on the tower clock’s faces). Thus, the building constitutes a war memorial, recalling the German terror of the First World War and Allied solidarity in the reconstruction years. As early as the 1930’s the new library attracted thousands of tourists and received visits from hundreds of emissaries from every part of the globe.

In 1940 when the Wehrmacht occupied Leuven, the library and its contents went up in flames once again. After the war the burnt-out shell was restored and the interior was somewhat modified. As the Central Library of the Katholieke Universiteit Leuven, it now houses more than a million volumes.

Photo above is of an outside stone wall engraved with one of the schools that contributed to the rebuilding of the Library.

It reads "The Public Schools of the State of New York."

BTW, did you happen to notice the pierced fly in the top photo? I have yet to find the story behind it!
Posted by PEANUT at 2:31 PM