In front of the camera - a rarity for Krist 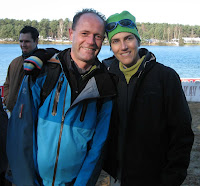 Krist is responsible for hundreds of photos I've shared with all my friends, family, sponsors over the past year while I raced for Lotto-Belisol Ladiesteam. He even took the action photo I used for my 2006 cyclo-cross trading cards. Since he is not used to posing for the camera and i'm not too thrilled with posing, we are sporting 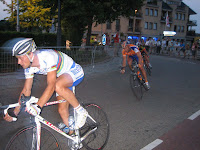 the semi-smiles. The photo was taken last weekend at Lille.

Krist was also part of my big 2006 post road season party at the Tom Boonen Invitational Criterium. I was off the front on the half-cobbled (casein in dutch) course until i got a FLAT (vlat in dutch) tire! Bugger. I 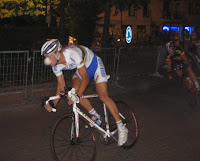 pulled off the course and waved to the peloton as they passed. I then had to walk back to the wheel pit area which was too far away from where i flatted to get back into the race. But i did find it an odd experience having to explain to ten thousand fans why i went from first to dnf. I learned how to pronounce "Ik heb vlat" really well as i shimmied through the swaying crowds of inebriated fans.

Once cleaned up and changed, I joined them for my one yearly 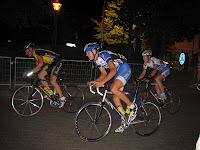 Kasteel Bier...or seven. A bunch of us who rarely get to say more than hello to each other during the season had the opportunity to sit down and talk while watching the parade of lycra'd pros promenade before us! The first few laps of the guys race consisted of select riders being driven around the course in the back 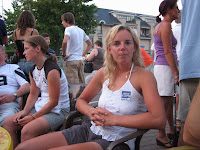 of a while convertible flanked by podium women. The next few laps was "clowning around" laps where they showed off the details of their sinewy bodies to the crowd - something we rarely get to see since normally they are flying by us at 60kpm. Since it was an evening event, we partied until about 2am. The next morning i was on a plane to California, still happily buzzed. 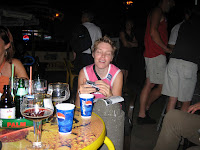