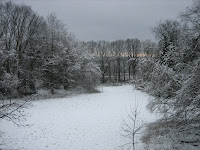 Yes, got it all chopped off this morning.

Before I left my apartment at 8am to get the dreaded hair cut, I noticed that it looked a little dark outside. No problem, I'll bring my lights. The second i exited the building, I was pummeled by the largest, densest snowflakes imaginable. The snow fall was so thick that i had to ride one handed so the other hand could shield my eyes from the white not-so-fluffy pellets. By the time i arrived at the salon - twenty minutes later, I was completely white, covered in a layer of snow from head to toe while my face was frozen white.

Instead of going to joke salon or hollywood salon, I opted for a salon for heren (men.) I figured they have lots of experience with short hair AND if i get a shaved face it wouldn't be as untoward. Well, he didn't shave my face but I did lose most of my hair. I now look like a little boy. At least the cut goes with my non-child-bearing boy hips.

As i was leaving the salon, the stylist told me to be careful on the roads. As he pointed to the front of his shop, he added, "When it snows, every single cyclist who turns this corner falls down." As much as I wanted to confirm his story, I didn't want to take the chance myself OR wait around in the cold to to see if others slide out on their asses. Sorry.

Here's a photo of my backyard mid-snowfall. I took it just after i got my haircut.
Posted by PEANUT at 5:17 PM

Sir,
Wouldn't steering with one hand while shielding your eyes from snowflakes with the other constitute multi-tasking? And I for one would love to see a photo of your '64 "Johnny Unitas" before it grows out. Or did you go for the '69 "Gene Krantz"?
-- E.C. Chamberlain

I'll take a photo of my tiny 'do as soon as i finish playing with my Tonka trucks and Hotwheels cars - wouldn't want to multitask.

or should we chant

"I'll take a photo of my tiny 'do as soon as i finish playing with my Tonka trucks and Hotwheels cars - wouldn't want to multitask."

this could be a wierd Classics season, p'nut.

Why did you not tried ? (for the corner).
This story would have been very FUNNY ... lol

To listen to the local tv, one would think it is the epic-est storm of all-time, ever! In the history of ever! It's barely a dusting. In Oswego over the weekend they got 6 feet of snow! And it's still coming down!