Last weekend i stood at the start line of my last CX race... with a flat tire. I didn't realize it, though, until the second lap. I just figured i was having a bad day, bad legs, bad bike handling skills, unmotivated, out of shape, whatever. Nope, a rear flat. When i exchanged bikes in the third lap, I was already so worked from willing the bike forward and upright that I could do nothing but maintain my less than stellar position in the field. THe upside of it was that the course was so much fun. If you merged a BMX course with singletrack, you'd come up with this race - undulating terrain with power climbs, bermed turns.
After the race, I was called back to the start line. I was fearing the worst - drug testing. I wouldn't mind peeing in a cup in front of others if it took me less than three hours on average to get over stage fright. But no, they wanted me for a podium appearance. As soon as i showed, they gave me a congratulatory Primus Beer and strapped me into a bright orange jersey zipped from behind. A few minutes later, I was on the podium waving to the crowd. I still have no idea why they put me on the podium when i did not place top 3. Maybe a consolation prize? 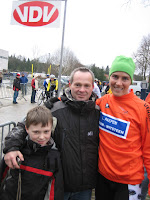 It was a memorable season indeed. I just can't thank everyone enough who supported me in my effort to race my heart out! After the race, Serge and Christophe drove me home as usual, and for the last time. I'll miss them!

I'm now onto longer bike rides to prepare for road season. THis sunday, I board the train to Agen, France for Team Presentation and eight days of training camp - 6 hours of saddle time per day! maybe i ought to invest in those padded underwear to wear under my cycling shorts to give my butt time to acclimate to doing extended time on the bike.

The photos are of me on the podium for reason unknown and of me with my supporters Marc and Yannis.
Posted by PEANUT at 9:22 PM

Congrats on the end of your cross season. Here's to be being fast for the road season.

Same sentiment...congrats! Odd about the podium bit. Must be a function of foreign-ness, maybe..