Sorry for the delay in writing about the race last weekend. It was another frustrating day at the office. I've taken the past few days to think about the events of the day. 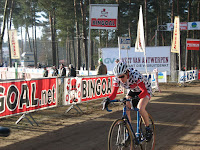 Everything that went wrong:
The next day, I called my coach for a pity party. Instead he told me, "You name one woman at the start who didn't have something go wrong before the race." He was right. It's not about the incidents or "excuses" but rather my reaction to them.

I was in fight-or-flight mode even before race day arrived! No wonder I was exhausted.

Instead of working on getting my friend to arrive on time or stop getting lost and take the shortest routes, because that may never happen, or trying to control all other random things that can go wrong, I am now working on my reaction to them. I wish i could back time, try it all again but in a more calm, relaxed (rustig in dutch) state and see how well i could have done.

My last cyclo-cross race is this weekend in Kasterlee, Belgium. You can bet i will have implemented this new approach - or at least i will have started to head in that direction. I suppose it may take some time to change who i am considering it probably took years to get good at freaking out about every little innocuous incident.

The real pity is that if i more tranquil before the race, I would have really enjoyed the course. It had a few challenging deep sand sections, some rollercoaster bmx bumps, a strip along the lake and the obligatory disco flyover.

The day wasn't a complete disaster, though. I had a great time with my buddies (two sisters ages 11 and 15) after the race. As we walked along the course watching the men, we played a game called find the red-haired boy with big eyes.

Two days before the race, i ran into someone who said he planned to spectate at the race. I heard his cheers during the race and figured if i saw him afterwards, i'd thank him for his support. The 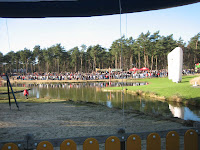 problem was I didn't know what he really looked like - i could only recognize his voice since we met while riding bikes. In a sea of 15.000 people, it turned out to be a challenging task! So for the next two hours, the girls and i played jokes on each other pointing out the most unlikely guys to ever ride a bike, like 75 year old guys with oversized beer guts double-fisting it - beer in one hand and a cigarette in the other! One of the gals even found an actual redhead, which i'd say is an anomaly here in Belgium!
Posted by PEANUT at 6:23 PM

you just go out there and have fun in that last cross race, Christine!

these are the days. and i think a couple of 11 and 15 year-olds helped pave that path.